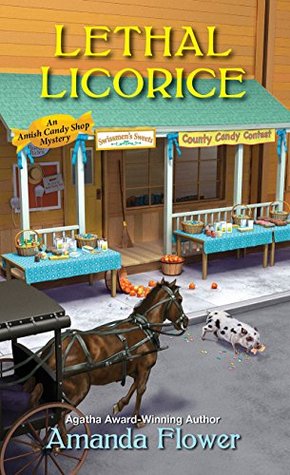 Too many sweets spoil the murder . . .

Harvest, Ohio, is a long way from New York City, where Bailey King left a coveted job as a head chocolatier to take over Swissmen Sweets, her Amish grandparents’ candy shop. Now, while caring for her recently widowed grandmother, she plans to honor her grandfather’s memory by entering the annual Amish Confectionery Competition. But between lavender blueberry fudge and chocolate cherry ganache truffles, Bailey may have bitten off more than she can chew when the search for a missing pot-bellied pig turns up a body suffering from sugar overload—the fatal kind . . .

A candy maker from a neighboring town who wanted Englischer Bailey disqualified for being an outsider, Josephine Weaver died from an allergy to an essential licorice ingredient. The suspects include: Josephine’s niece, a young woman going through her rumspringa, or running around time, and Bailey herself. Now it falls to Bailey, who’s sweet on the local sheriff’s deputy, to clear their names and entice a killer with a cast-iron stomach for cold-blooded murder . . .

Lethal Licorice by Amanda Flower is the second book in the cozy Amish Candy Shop Mystery. In this series Bailey King had been trying for a coveted job as a head chocolatier in New York when she decides to instead head home to Harvest, Ohio to take over Swissmen Sweets, her Amish grandparents’ candy shop.

After returning home Bailey had found herself in the midst of a murder investigation but now that things have settled down she fully intends to invest her time making Swissmen Sweets the best. To honor her grandfather’s memory she enters the annual Amish Confectionery Competition where a fellow candy maker, Josephine Weaver, wants to get her disqualified for not being Amish.

After Bailey’s encounter with Josephine she’s asked to help search for Jethro, a missing pot-bellied pig, but instead finds herself stumbling upon another dead body in the small town. Again Bailey finds herself right in the middle of the investigation and needing to help solve the murder before she or someone from her family become suspects.

There are a lot of things that I have loved about Amanda Flower’s Amish Candy Shop Mystery series. The setting being in the middle of the Amish community is one that is a bit unique on it’s own giving the reader a glimpse into another lifestyle. The author does a good job showing what it’s like in differing Amish groups and what it’s like for a non-Amish relative trying to fit in to the town and her family.

The characters in the series are all likable and realistic feeling. And let’s face it, I’m a sucker for some type of pet/animal being involved in a cozy. In this case little Jethro the pig was a favorite part of the series so to hear he’s missing I had the “oh my gosh find the pig and forget the dead mean lady!!” moment in this one. So really there are two mysteries to solve which made it even more fun to follow along making this another great addition to this series.

Amanda Flower, an Agatha Award-winning mystery author, started her writing career in elementary school when she read a story she wrote to her sixth grade class and had the class in stitches with her description of being stuck on the top of a Ferris wheel. She knew at that moment she’d found her calling of making people laugh with her words. Her debut mystery, Maid of Murder, was an Agatha Award Nominee for Best First Novel. Amanda is an adult services librarian for a public library near Cleveland. She also writes mysteries as USA Today bestselling author Isabella Alan.