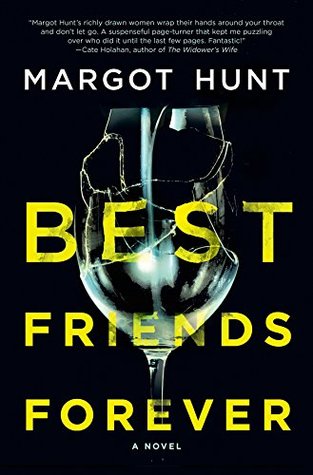 Can you ever truly trust your friends?

Alice thought she knew everything about her best friend Kat, from the secrets of her wealthy family to the fact that behind closed doors Kat’s husband Howard is a drunk and a bully.

But now Howard has been found dead, having plunged to his death from the balcony of their highly desirable mansion, and the police are convinced he’s been murdered.

So why in her time of need has Kat stopped answering Alice’s phone calls and texts. Why won’t Kat’s family allow Alice to visit her anymore? And why are the detectives looking directly at Alice in relation to Howard’s death?

Perfect for fans of C.L. Taylor and B A Paris, this fantastic page turning thriller will have you demanding who needs enemies when you’ve got friends like these…

Best Friends Forever by Margot Hunt is another thriller that I can easily say grabbed me from the opening pages and just wouldn’t let go. Dropping into Alice’s life we know she is a busy wife and mother who never expected to find the police on her doorstep but that is just what happened to her one morning as she was making breakfast before getting her children off to school.

Alice’s friend’s husband had died recently from what she thought was a tragic accident so why are the police wanting to question her?? But as Alice goes through the interview she learns that the police think that Kat’s husband may have been pushed instead of falling to his death and the police may even be looking her way. A frantic Alice wants nothing more than her best friend but Kat hasn’t been in contact so she begins to wonder just how well did she really know her friend anyway?

Starting this book I found myself loving every minute as I found out more about Alice and her relationship with Kat. The relationship is one that you can think of the old saying of being like an onion with it’s many layers for the readers to slowly peel back as the pages turn. You just know with every chapter that goes by that there is going to be twists and turns coming and can’t wait until they do.

I really really wanted to give the book a full five stars because it did keep me on the edge of my seat while I flew through reading it in only a few hours time. But when getting deeper into this story it really began to remind me of a television show from a few years back. The story is extremely similar and I definitely enjoyed that plot too so it’s no wonder I was hooked on this one. With the differences between the two though I still felt this a great read and worth at least the four stars and would definitely recommend checking it out.

Margot Hunt is the pseudonym of a bestselling writer of twelve previous novels. Her work has been praised by Publisher’s Weekly, Booklist and Kirkus Reviews. BEST FRIENDS FOREVER is her first psychological thriller.

Learn more about Margot and her forthcoming books at
margothunt.com.