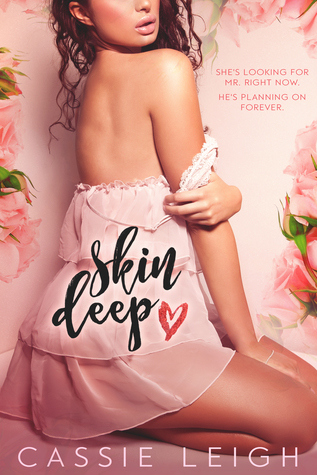 Gigi Duval doesn’t do relationships, especially with her heart and career on the line. She values two things–her image and a good time in the bedroom. Watching men lie and cheat her whole life hardened her against “happily ever after”. When she interviews with Roman Bishop, the sexy co-owner of Ink Spinners Tattoo, she begins to wonder if he might be more than a casual fling. Only one thing is certain: Roman is off limits. Gigi can’t possibly add her best friend’s brother to her little pink book. Or can she?

Are you a book reviewer?

The Red Barron wasn’t the kind of place Roman Bishop ever would have expected to see an angel. This place was a dive in the truest sense of the word, with hard music, cheap beer, and dark corners. Damn—he wanted to see her light up one of those corners.

Swathed in a soft pink dress and white fuck-me heels, she had him entranced. She moved the curtain of her dark hair, exposing the graceful curve of her shoulder, a creamy canvas that made his hand tingle with the phantom buzz of his tattoo gun. It would be a fucking honor to mark her. The glow of that lovely skin had drawn him away from his friends like a moth to her flame. Hell—he had never seen a woman like her and he was no virgin schoolboy fumbling in the dark.

“You’re too classy for a dive like this, beautiful.” He slid into the vacant seat beside her even as he cringed inwardly at his own cheesy pickup line. “Are you lost?”

She turned clear absinthe green eyes his direction and his breath caught.

Roman’s heart sank. Of course, a girl that gorgeous wouldn’t be alone. “Can I at least keep you company? I’ll buy you a drink and keep the riffraff in this joint at bay.”

Great, now he sounded like a desperate ass. If she minded, she didn’t show it. If anything, her smile grew and she turned more fully his direction.

“I’ve got a drink.” She held up her wine glass as evidence—yet another sign she was too much for this shithole. “But I would welcome the company.”

They chatted for ten minutes. Every word confirmed her as both witty and intelligent, proving she was more than just perfumed eye candy. He almost wished that’s all she would have been. If her mind had been inferior to the package on the outside, he could have enjoyed the view and forgotten her, but now… He cut the thought off as the shadow of her date loomed over them—literally.

“Am I interrupting something?” Her date looked like a yuppie, complete with chinos and a striped polo. Why the hell would a guy like that have her wait here?

She glanced at the dainty gold watch on her wrist. “Waiting for you. You’re thirty minutes late.”

Yuppie-boy held out his hand for her with a cocky smirk that Roman’s fingers itched to bitch-slap off his face. “Don’t worry, doll. I’ll make it up to you.”

“We’ll see about that.” Her smile turned sugar sweet as she slid out of the barstool. She did not take his hand, instead brushing past him towards the exit. “Are you coming?”

Leaning towards Roman, while eyeing her admittedly fine ass, her date whispered as if they’d been frat brothers or some shit. “She’s sassy and demanding but totally worth the ride.”

The sleazebag—he’d been downgraded—hurried to catch up to her and hold the door. She looked back at Roman and her smile warmed. It hadn’t met her eyes when she smiled at her date. She’d given that gift to Roman, and he didn’t even know her name.

Roman’s pencil tip dug into the front desk. His mind forced back from the memory he’d been drifting in as Declan Stone, his best friend and fellow artist, yanked the sketchpad away. Roman made an ineffectual grab for the spiral bound paper.

Declan leaned back in his chair, holding the artwork just out of reach. “Just checking out what you’re doin’.” He tossed the book down in front of Roman and pointed at the pinup girl meticulously drawn from memory on the page. “You’ve been spaced out since that chick last night.”

“So forget about it. She left with somebody else.”

His friend was right. She did leave, but something about that look on her face as she had—as if she resigned herself to it but really wasn’t interested. A woman like her could have anyone, which left him wondering why she’d gone, instead of telling the douche canoe to fuck off. Ultimately, it wasn’t his place to get involved. In the rare down time he had between clients, he had better things to do than moon over the one who got away—like keeping the doors to their shop open.

Ink Spinners Tattoo & Gallery had been a dream and a labor of love for both Roman and Declan—one whose timetable moved up thanks to Roman’s ex. The old brick building was one of the last the NewBo District had saved. They closed on the purchase just one week before the wrecking ball and saved it from becoming a new urban development made to look vintage. Thanks to the local historical society, they got it for a song and spent the better part of the year renovating it. Now the shop looked as if a steampunk barbershop and a Victorian apothecary had a baby. For a couple of black sheep local boys, they were doing all right.

Roman dragged his hand over the rough stubble of his jaw. “You’re right. Not like I could find her if I wanted to.”

“Funny you should say that.” A cocky grin split Declan’s face just as the bell over the door rang.

Roman turned, smile at the ready as the girl in question sauntered through the door. “Damn.”

Her steps faltered at his whispered oath, but he couldn’t help himself. Ten seconds ago, he had no hope of ever seeing her again, let alone in his shop. Good girls like her don’t have ink. Everything about her whispered that he was right, especially the way she dressed today; a blush pink blazer, layered over a white t-shirt that she tucked into a pink and black rose patterned pencil skirt. She had tamed the dark curls he remembered from last night into a bun, and oversized pearl earrings hung from earlobes that he already visualized sucking on.

“You’re Ann’s step-brother?” Her voice held the same breathless wonder that he uttered his own curse in seconds before. When she continued, her tone was brighter, with crisp efficiency. “I’m here about the job. Ann Kennedy referred me.”

The attitude switch about gave him whiplash.

She held out her hand and as he stood to take it, her soft, slender fingers seemed swallowed up by his darker, tattooed mitt. “Roman Bishop and this is my business partner, Declan Stone, you are…”

“Oh yeah, I’m Gigi Duval.” She stared up into his eyes, leaving her hand in his for longer than necessary before she seemed to notice and pull back.

He forced down a groan at the simple loss of her warmth in his hand. She wet her pouty pink lips. When his gaze zeroed in on the subtle movement, the corners turned up, ever so slightly. This couldn’t be good. Mere moments into formally meeting her and he was already smitten. Would it be strange to propose marriage now? Oh wait—she had a boyfriend—at least she did last night. 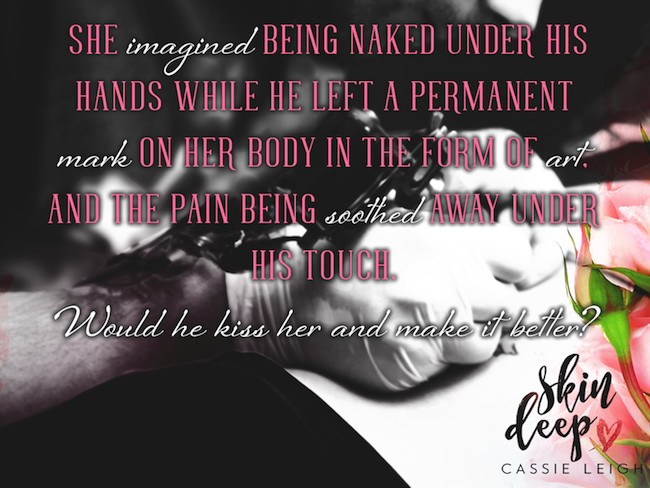 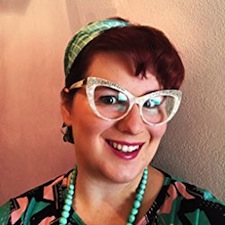 CASSIE LEIGH writes contemporary and paranormal romance that’s more than skin deep. Before she could write, she began dreaming up stories. Starting with recorded

conversations for her dolls on a Fisher-Price cassette player, she moved on to an antique typewriter found at a garage sale, then an electric typewriter, and finally computers. It wasn’t until she picked up romance novels in her late twenties that she found where she belonged. With the help of her husband, she carves out time to write while raising five children, working full time and obsessing over her laundry list of eccentric passions including MMA fighting and Pinup style. Every new obsession seems to find its way into her romance world!

5 Comments on “Skin Deep by Cassie Leigh blitz with giveaway”