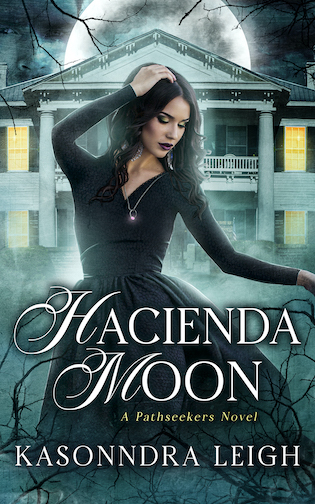 Tandie Harrison is a police medium who has just suffered a divorce after losing both her psychic visions and her daughter in a car accident.

When she leaves New York City to start a new life near her hometown, she moves into the alluring plantation house, Chelby Rose, and falls for its charismatic caretaker, Eric Fontalvo. Their burgeoning affair ignites a centuries old curse ensnaring them in a web of danger, deceit, and intrigue. Soon Tandie learns that in placid Bolivia, the worlds of the living and the dead are dangerously connected.

Hacienda Moon is a seductive tale of one woman’s journey to confront the demons of her past and find the courage to face her future. It is a mesmerizing novel that explores the deepest depths of human nature, and the characters will hold and haunt you long after you have read the final chapter. 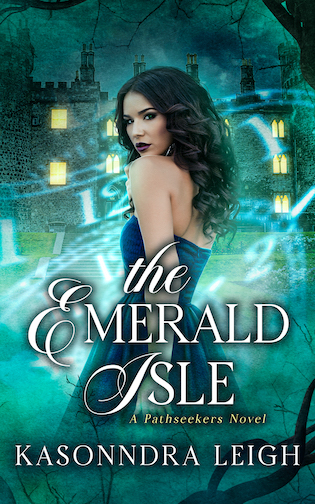 Two years ago, Tandie Harrison learned she was a Pathseeker, a witch who can manipulate time. With the help of her soulmate, Eric Fontalvo, she was able to break a 300-year-old curse. Now she has established herself as a private paranormal investigator in the quiet little old southern town of Bolivia, North Carolina. With the past behind her, she’s prepared to embark on a new journey of love and success.

However, the past has a way of coming back to haunt you when you least expect it. Enter Saul Chelby: the handsome real estate tycoon who stepped aside to allow Tandie happiness with Eric. Now a new entity threatens everything Tandie, Saul, and Eric worked to conquer. Will Tandie and Eric’s newly reignited love will pass this latest test?

Love, ghosts, witches, old houses, handsome heroes, and a secret that will threaten everything Tandie and Eric fought to achieve. The Emerald Isle, a Paranormal Time Travel Mystery. 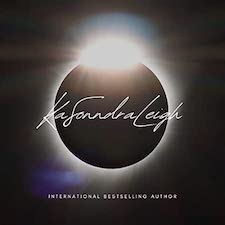 Author of the International bestselling novels, the Prelude and the Lost Immortals Saga, KaSonndra is also a mother, designer, reader, gardener, home renovator, and a slayer of undead Egyptian mummies in Tomb Raider. She believes in karma, coffee, and seriously wishes that the producers of Xena would bring her favorite show back.

KaSonndra was born in the race-car city of Charlotte, NC, and now lives in the City of Alchemy and Medicine, NC, when she’s not hanging out in Bardonia (Lost Immortals Saga setting). Most of her characters are based on people that she has met throughout her travels and adventures.

People tend to stop and start conversations with KaSonndra as if she has known them her entire life. Does this freak her out? Not really. Her mom says that one day she’ll get kidnapped by one of these folks. KaSonndra’s response? She told her mom that if it weren’t for these lovely people, then she wouldn’t be able to create such fabulously romantic stories!

← Cover Reveal: The Nine: Zane by Elle Arroyo with giveaway
Making the Deal by Shelby MacKenzie blitz with giveaway →