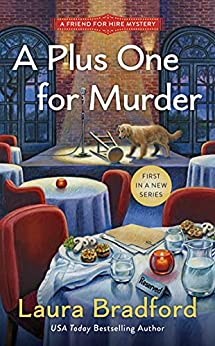 Title: A Plus One for Murder

Entrepreneur Emma Westlake is reinventing herself as a hired friend when murder gets in the way in this exciting new mystery series from USA Today bestselling author Laura Bradford.

Emma Westlake has always wanted to be in business for herself. As a kid, she had her own successful lemonade stand and dog-walking business. And when she entered adulthood, Emma sunk all her cash into her dream job of travel planning. But as her customers became more and more internet savvy, the need for her services declined. At a loss for what to do next, she turns to an elderly friend who suggests she try to get paid for doing something she’s really good at–being a paid companion. Emma thinks it’s a crazy idea until requests start pouring in. Big Max from down the block wants her to act as his wingman at the local senior center’s upcoming dance, nurse practitioner Stephanie needs a workout partner, and writer Brian Hill asks Emma to be his cheering section at an open mic night.

Brian will be reading from his latest work and wants to know someone will clap for him when he’s done. When Emma balks at the notion that people wouldn’t, he tells her the room will be filled with people he’s invited–most of whom will likely want him dead by the time he’s done reading. Assuming he’s joking, she laughs. But when Brian steps up to the mic and clears his throat to speak, he promptly drops dead. Emma is one of the last people to see him alive, and so she becomes an immediate suspect. Now she’ll have to cozy up to a killer to save her skin and her new business.

A Plus One for Murder by Laura Bradford is the first book in the new cozy Friend for Hire Mystery series. As with most cozy mysteries each book in this series will feature it’s own mystery to be solved within that book so they can be read as a standalone or in any order if choosing to do so. However, there is character development that carries over from book to book for those that follow the series and characters from the beginning.

Emma Westlake has always wanted to be her own boss and run her own business but things are not going so well with Emma’s attempt to do just that. Emma had decided that she would open her own travel agency and did alright for a while but clients have been few and far between with travelers just booking themselves online these days.

As Emma goes to visit an elderly friend, Dottie, she can’t help but share her troubles. Dottie immediately suggests a new business to Emma to be a friend for hire since that is essentially how they became friends. Emma finds the idea ridiculous at first but then cautiously tries it out. However, as Emma does book a client who wants her to attend open mic night and cheer for him she instead finds herself witness to his murder.

My first thought in seeing this new cozy was what the heck is a Friend for Hire so of course I had to pick up the book and find out. As odd as this occupation may seem the protagonist actually made it work and found clients which made sense so I became interested in seeing where else the story would take me. The secondary characters actually made the book for me more so than the protagonist as she did have a few moments that seemed a bit too naive. Overall though I did like this one enough to start this first book out at three and a half stars and to want to return to it in the future. 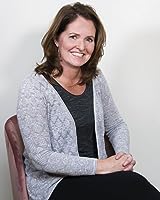 While spending a rainy afternoon at a friend’s house more than forty years ago, Laura Bradford (a.k.a. Elizabeth Lynn Casey) fell in love with writing over a stack of blank paper, a box of crayons, and a freshly sharpened number two pencil. From that moment forward, she never wanted to do anything else.

Today, Laura is the national bestselling author of more than 35 books and stories, including her latest release, Piece by Piece. Her first women’s fiction novel, Portrait of a Sister, was a July 2018 Book Club Pick for Delilah of Delilah Radio and a Summer Book Club pick for Southern Lady Magazine.

Laura also pens several mystery series including; An Amish Mystery series, the Emergency Dessert Squad Mysteries, the Tobi Tobias Mysteries, the Southern Sewing Circle Mysteries (written as Elizabeth Lynn Casey), and the upcoming A Friend For Hire Mysteries. She is a former Agatha Award nominee, and the recipient of an RT Reviewer’s Choice Award in romance. Laura enjoys baking, spending time with her family, and being an advocate for those living with multiple sclerosis. Learn more at: https://www.laurabradford.com/