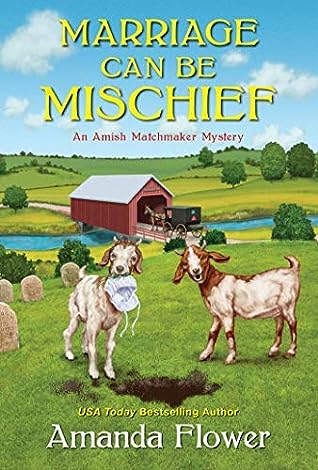 Title: Marriage Can Be Mischief

Millie Fisher may be widowed, but she leads a full life in her Amish hometown of Harvest, Ohio. There’s her quilting circle, her Boer goats, her gift for matchmaking—and the occasional murder…

Millie is happy that her childhood friend, Uriah Schrock, has returned to Harvest after decades away. He was sweet on Millie in their school days, but she only had eyes for her future husband. Now, there’s a new spark between them, so Millie is concerned when Uriah doesn’t show up at the Harvest concert series—or for his job as the Village square’s groundskeeper. Perhaps Millie has been involved in too many murder investigations, but she has a sinking feeling. And when she and her best friend, Lois, find Uriah with the police, it seems she’s right…

A film crew is in Harvest to make a movie about a forty-year-old unsolved murder. A skeleton has been found at the bottom of a ravine—and Uriah is certain it’s his sister, Galilee. Right before Uriah left Ohio, she disappeared, and her harsh husband, Samuel, was found fatally stabbed with a knitting needle. The sheriff declared that Galilee killed him and ran away. Uriah never believed the theory, and he’s come back to Harvest hoping, Gott willing, Millie will help him stitch together the truth…

Marriage Can Be Mischief by Amanda Flower is the third book in the cozy An Amish Matchmaker Mystery series. This series is a spin off of Amanda Flower’s cozy Amish Candy Shop Mystery series with it being set in the same Amish town but with a new lead character. Readers do not need to have read the Amish Candy Shop Mystery series to enjoy this one, although I will say it’s a fun one that I have enjoyed. As with most cozy series too each book of this series will have it’s own mystery that will be fully solved within the book so they can be read as a standalone or in any order if choosing to do so although there is character development carrying over from book to book for those who follow from the beginning.

Millie Fisher has just moved back to her Amish community in Harvest, Ohio after being gone for several years taking care of family in other Amish communities. Millie is now a widow and is a quiltmaker, that is how she makes money to pay her bills, but Millie has always considered herself to be a matchmaker. Millie doesn’t think it would be fair though to use her gift of knowing what couples will be a good match to make money and does this out of the kindness of her heart. Unfortunately for Millie she has also picked up another side hobby that is keeping her busy and that is hunting for murderers in her Amish community with her best friend, Lois, who is actually an Englischer. This time around Millie’s childhood friend, Uriah Schrock, had returned to Harvest after being gone for decades after the disappearance of his sister, Galilee. It doesn’t seem a coincidence to Millie when bones are found by a film crew working in Harvest that belong to Uriah’s sister. Galilee’s husband had been abusive and was found murdered all those years ago and it was always thought that Galilee may have killed her husband and fled but now Millie is determined to get to the truth of it all.

The An Amish Matchmaker Mystery series is actually the third by Amanda Flower that I have followed completely from the beginning and have enjoyed every minute. These are all just the right combination of quirkiness and humour that I enjoy the most. The balance between the Amish lead and her best friend is something that keeps a smile on my face the entire time I read. When finished with this third book of the series I would rate it at four and a half stars with only just one moment I found a bit too predictable to bump it to five but otherwise a lovely addition to the series!