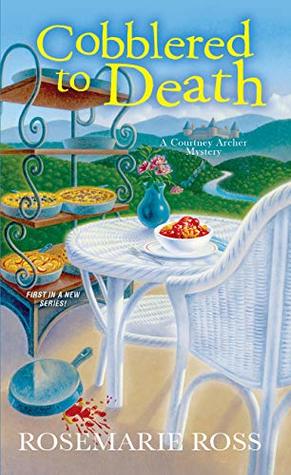 Courtney Archer is known for hosting the show Cooking with the Farmer’s Daughter . . . despite the fact that she’s actually a pediatrician’s daughter. Now she’s signed on for a role on The American Baking Battle. On this reality show, she can start developing a more authentic image for herself—and as a bonus, the usual backstabbing and manufactured drama isn’t part of the Baking Battle script. But genuine drama is heating up behind the scenes . . .

During a film shoot in the scenic Pocono Mountains, Courtney has to juggle career commitments like pots on a six-burner stove. Adding to the stress is Mick, a contestant who finds out about her fake farm-girl story. Determined to succeed at her new gig, she whips up a cherry cobbler in a cast-iron fry pan one evening and leaves it out to cool. But the next morning, it’s Mick’s body that’s cooling—right next to Courtney’s pan, now classified as a murder weapon . . .

Cobblered to Death by Rosemarie Ross, Rose Ross Zediker is the first book in the cozy Courtney Archer series. As with most cozy mystery series each book of this series will contain it’s own mystery that will be fully solved so they can be read as a standalone or in any order if choosing to do so. There will be character development that carries over from book to book though for those who follow the series from the beginning.

Courtney Archer was proud of herself for getting her own cooking show which had become quite a success. However, Courtney was not proud that her cooking show, Cooking with the Farmer’s Daughter, was basically a lie with Courtney being a city girl and not having been raised on a farm but the network had insisted that Courtney use the persona and protect the lie of where she was really from.

Now Courtney is participating in a reality show, The American Baking Battle, filming in the Pocono Mountains and Courtney hopes she can be more herself on this show. Unfortunately for Courtney another contestant in the baking battle has learned her real identity and that same contestant is then found murdered. To top things off for Courtney and put her as a suspect it was her own frying pan that was used as the murder weapon.

I’m always excited to pick up a new cozy series and quite often love those centered around food of some sort. The Courtney Archer series however got off to a slow start for me when I didn’t find the overly humorous and quirky content that I seek out in cozies. I think for me the repeated mentions of the lead not being who she was pretending to be kind of dragged the story down instead of being humorous. When finished I just found this first book to be just so-so but I do have the second so I’m crossing my fingers the second book is more my speed.

Rosemarie Ross is neither a chef, gourmet cook, nor television cooking star, but she loves watching them and turned that love into a cozy mystery series. Rosemarie Ross is also the pseudonym of multi-published author Rose Ross Zediker, who writes contemporary and historical inspirational romances novels which have appeared on ECPA bestseller lists and been finalists for the RITA, National Reader’s Choice, Booksellers Best, and Book Buyers Best award contests. In addition, Rose has hundreds of publishing credits in the Christian magazine genre for children and adults.