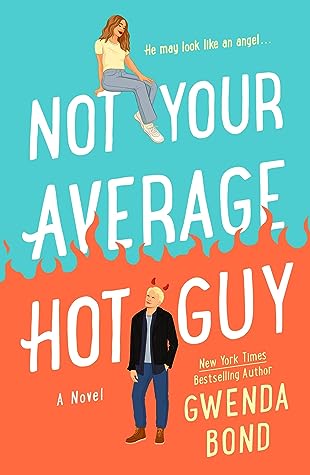 Title: Not Your Average Hot Guy

A paranormal romantic comedy at the (possible) end of the world.

From New York Times bestselling author Gwenda Bond, Not Your Average Hot Guy is a hilarious romantic comedy about two people falling in love, while the fate of the world rests on their shoulders.

All Callie wanted was a quiet weekend with her best friend. She promised her mom she could handle running her family’s escape room business while her mom is out of town. Instead a Satanic cult shows up, claiming that the prop spell book in one of the rooms is the real deal, and they need it to summon the right hand of the devil. Naturally they take Callie and her friend, Mag, along with them. But when the summoning reveals a handsome demon in a leather jacket named Luke who offers to help Callie stop the cult from destroying the world, her night goes from weird to completely strange.

As the group tries to stay one step ahead of the cult, Callie finds herself drawn to the annoying (and annoyingly handsome) Luke. But what Callie doesn’t know is that Luke is none other than Luke Morningstar, Prince of Hell and son of the Devil himself. Callie never had time for love, and with the apocalypse coming closer, is there room for romance when all hell’s about to break loose?

Not Your Average Hot Guy by Gwenda Bond is the first book in the new paranormal romantic comedy series by the same title. The story in this one is told by changing the point of view between the two lead characters, Callie and Luke. It also will a series that continues in the next book with the same two characters so they would be best to start with this book and continue in order.

Callie is a recent college graduate who found that her degree wasn’t really worth a whole lot and has found herself working in her family’s escape room business instead of in her own career. Callie’s mother is leaving town for a few days and has left Callie in charge while she’s gone and Callie assures her she will be fine but of course her brother could be called if needed. Almost as soon as Callie’s mother is gone a strange group comes in to play Callie’s own creation, the hardest room they have to try to solve.

As Callie watches through the monitors though the group easily escapes and does so with an old grimoire Callie had found at an estate sale and used as a prop in the room. As Callie tries to stop them she finds the group are no ordinary players but a satanic cult trying to summon a demon. The next thing Callie knows she and Mag, her longtime friend and co-worker, are taken hostage. Before Callie knows it she and Mag are witnessing a demon appearing and she finds he’s actually rather cute. When the cult threaten the safety of the world by going after an ancient weapon Callie finds she has to trust in the demon, Luke, in order to save the world.

Not Your Average Hot Guy by Gwenda Bond isn’t a bad read at all but the first thing I would warn readers of with this one is it felt as if the characters were very young. The story is sort of a cheesy one, I suppose for the comedy side, but I didn’t mind that as much as having to continue to remind myself Callie was past college age making this new adult territory but I’ve read stories with a more mature feel in the young adult category. Even if this ended up only three stars from me though I would probably pick up the next to see where the story goes. 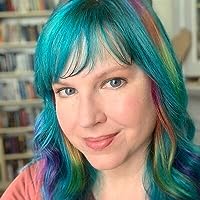 Gwenda Bond is the New York Times bestselling author of many novels, including the first official Stranger Things novel, Suspicious Minds. Next up is a fantasy rom-com duology from St. Martin’s Griffin, Not Your Average Hot Guy (2021) and The Date from Hell (2022). She also clearly escaped from a classic screwball romantic comedy. She lives in a hundred-year-old house in Lexington, Kentucky, with her husband, author Christopher Rowe, and a veritable zoo of adorable doggos and queenly cats. She writes a monthly-ish letter you can sign up for at http://www.tinyletter.com/gwenda. Visit her online at http://www.gwendabond.com or @gwenda on Twitter.