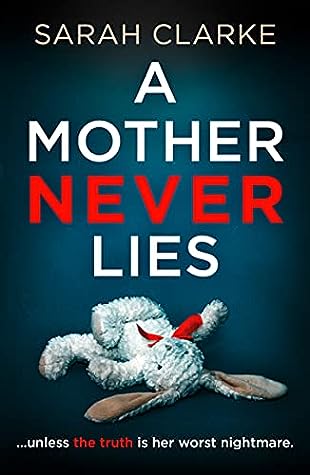 SOME TRUTHS CAN’T BE TOLD.

I had the perfect life – a nice house, a loving husband, a beautiful little boy.

But in one devastating night, they were all ripped from me.

It’s been fourteen years, and I’m finally ready to face the past.

I’m taking my son back.

He just can’t know who I am…or why we were torn apart.

A nail-biting thriller packed with shocking twists, perfect for fans of Lisa Jewell and Shalini Boland.

A Mother Never Lies by Sarah Clarke is a thriller read. The story in this one is told in different timelines dating between 1998 and a present time. This thriller is also told from different points of view involved in the story.

The story begins with Phoebe Taylor who is just returning to her parents home in London after being away for fourteen years. Phoebe’s only focus now is the urge to find the son she was forced to abandon all those years ago. The laws are not on Phoebe’s side however when it comes to an adopted child, the child could find out about a birth mother but Phoebe isn’t allowed to search herself.

After meeting Phoebe in the story readers are taken on a journey back to 1998 and her first meeting her son’s father. And then the story builds in the timeline beginning in 2019 while also continuing to look back at the past to eventually let readers in on what happened in 2005 that tore Phoebe and the child she loved dearly apart for the fourteen years until her return.

Now the first thing I will admit about A Mother Never Lies is I never truly cared for the protagonist in the story. As I followed her actions in the present timeline as she made one move after another that I questioned and to be honest wanted to toss the book at her during those moments I didn’t sympathize with her as one might be expected to. However, while she sort of drove me nuts with her actions I couldn’t help but also be compelled by what was driving her that had happened in the past and the urge to find out what would happen now. So despite it all when reading this story it really was gripping and kept the pages turning until the final reveal so I did end up enjoying this one.

I started writing psychological thrillers when I was 7. My teachers raised an eyebrow but it didn’t dampen my enthusiasm for the genre. After studying for a degree in Politics & International Relations, travelling the world for 6 years, and completing 5 ski seasons, I moved to London and became a copywriter, wife and mother. In 2018 I enrolled on the Faber Academy Writing a Novel course and finally learned the craft I loved. I joined HQ Digital in March 2020 and A Mother Never Lies is my debut novel.