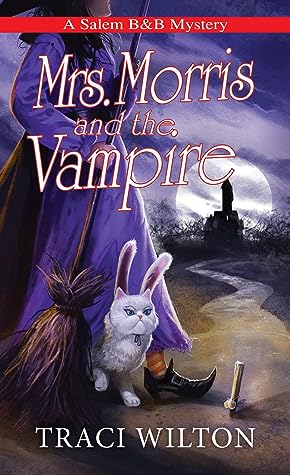 Title: Mrs. Morris and the Vampire

It’s B&B owner Charlene Morris’s second Halloween in Salem, Massachusetts, and one she won’t soon forget when a self-proclaimed vampire is murdered . . .

Charlene’s bed and breakfast is fully booked with guests wanting to experience Salem’s wildest holiday—especially the annual Witch Ball, held at the historic Hawthorne Hotel. At the dance, actual witch and winery owner Brandy Flint has her back up over her daughter Serenity’s new beau—it’s bad enough he’s a decade older, he also claims to be a vampire from Romania.

As for Charlene, with handsome ghost Dr. Jack Strathmore haunting her B&B, she has developed an open mind regarding the supernatural. But her mind is blown when the clock strikes midnight, the lights flare and dim, and the vampire vanishes—leaving behind only his cape and a wooden stake with a thick red substance on the sharp tip. The next morning, a naked man washes up on the shore with a hole punched through his chest, and Detective Sam Holden has a homicide on his hands. Now Charlene and Jack must put their heads together to find out who staged the trick to stake a vampire . . .

Mrs. Morris and the Vampire by Traci Wilton is the fifth book in the paranormal cozy A Salem B&B Mystery series. Each book in the series holds it’s own mystery that is fully solved so all books can be read as a standalone or in any order if choosing to do so. There will be some character development that carries over book to book though for those that follow the series from the beginning.

Charlene’s first experience trying to help solve a murder came when she found that her resident ghost, Jack, had been murdered and needed help finding his killer. Now Charlene is faced with yet another murder to be solved when Charlene attends the annual Witch Ball at the Hawthorne Hotel with her bestie, Brandy Flint. Brandy is not happy with her daughter’s date, a man claiming to be a vampire, so when at midnight he vanishes in a poof leaving only a wooden stake in his wake Brandy isn’t exactly disappointed. However, when the vampire’s body washes up on shore with a hole in his heart Charlene knows she need to find the killer quickly.

The A Salem B&B Mystery series is another that I have followed from the first book and have come to know well. Being a fan of crossing genres in my reads I have really enjoyed the supernatural touch to this cozy series. However, this latest installment of the series seemed to leave me with a couple of questions when done. The book still had the characters that I’ve come to enjoy and a quirky setting that I enjoy of course but overall I’d rate this fifth book at three and half stars after liking some of the previous a bit more but I will definitely be back to continue! 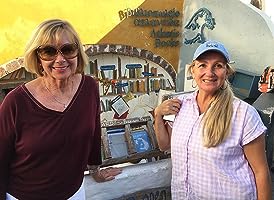 6 Comments on “Mrs. Morris and the Vampire (A Salem B&B Mystery #5) by Traci Wilton #bookreview #mystery”