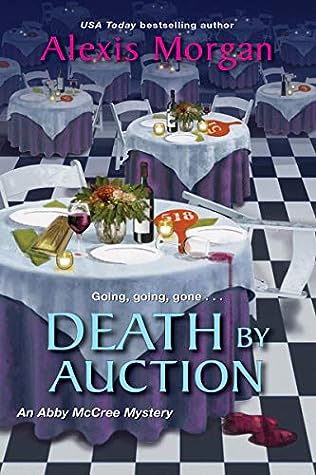 Not only did Abby McCree inherit her aunt’s house in Snowberry Creek, Washington, she inherited a handsome tenant and a whole lot of trouble . . .

It’s hard to say no to Tripp Blackston. That’s how Abby found herself on yet another committee, organizing a bachelors’ auction to raise money for Tripp’s veterans group. The former Special Forces soldier is mortified when Abby enlists him to be one of the prizes, but she has a covert plan to bid on him herself. Before she can, she’s foiled by a sniper bid from a gorgeous stranger, who turns out to be Tripp’s ex-wife, Valerie.

Still reeling from the shock that Tripp was married and wondering what his ex is suddenly doing in town, Abby goes looking to pay the auction’s emcee, radio personality Bryce Cadigan. She finds him in the parking lot, dead in his car. Valerie appears to be the last one to have seen Bryce alive, so she’s the cops’ best bid for suspect. When she asks Tripp for help—and lodgings—it’s Abby’s turn to block by inviting Val to stay with her. But did she just open her home to a murderer?

Death by Jack-o’-Lantern by Alexis Morgan is the second book in the cozy Abby McCree Mystery series. As with most cozy series each book in the Abby McCree Mystery series has it’s own mystery that is solved within the book so each can be read in any order or as a standalone if choosing to do so. Those that follow along from the beginning of the series will have some character development that carries over from book to book though.

This series introduces readers to Abby McCree who had just gotten divorced and had to sell her half of the business she shared with her husband over to him when she found out what her Aunt Sybil left her in her will. Needing a fresh start Abby decided to move into her Aunts former home and make it her own in small town Snowberry Creek, Washington. After arriving in the small town Abby found herself surrounded by her aunt’s old friends who are turning to her to fill the hole that her aunt had also left in their lives and trying to get Abby to volunteer for project after project.

Now Abby’s tenant, the very handsome Tripp Blackston, has asked Abby to volunteer on yet another committee. Tripp is helping to raise money for his veterans group by organizing a bachelor auction. Abby jumps in and the event is a success with only one little snag, a woman outbids Abby when Tripp is up for bid and Abby finds out in this way that Tripp was once married. Abby doesn’t have time to dwell on this news however when Abby goes to pay the auction emcee and instead finds him murdered and with another killer on the loose Abby begins to investigate.

I have followed the Abby McCree Mystery series from the beginning and have really enjoyed it. This series is one that I’ve found has some laughs, likable characters, a darling dog and even a bit of romance included in the stories. This third book also had yet another fun mystery to be solved yet again making this one another series that I will have no problem coming back to time and time again.

USA Today Best-selling author Alexis Morgan has always been an avid reader, and she loves spending her days with hunky heroes and gutsy heroines. She has published more than thirty books, novellas, and short stories, including contemporary romances, American West Historicals (as Pat Pritchard), Paranormal and Fantasy Romances. Her new contemporary series, Snowberry Creek, is being published by Signet Eclipse. She has been nominated for numerous industry awards, including the RITA© from the Romance Writers of America, the top award in the romance genre. Alexis loves to hear from fans. You can contact her through her website at http://www.alexismorgan.com