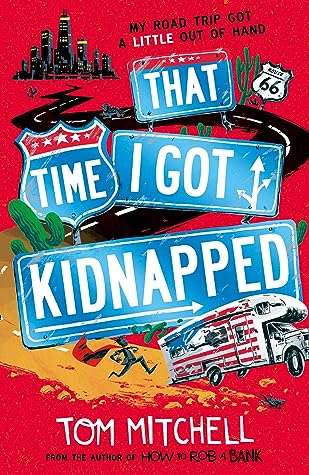 Title: That Time I Got Kidnapped

A hilarious, action-packed road-trip adventure from the author of HOW TO ROB A BANK, ideal for readers aged 10 and up.

When fourteen-year-old Jacob misses his connecting flight in Chicago, he tries to complete his journey to LA by Greyhound bus. But on board he meets American teenager Jennifer, who is carrying a mysterious package and being chased by an enigmatic pursuer known only as ‘the Cowboy’… And she needs a partner in crime.

The unlikely pair soon find themselves on the road-trip of a lifetime – a funny, filmic, page-turning adventure.

That Time I Got Kidnapped by Tom Mitchell is a hilarious, over the top, middle grade adventure story. Of course I’m well over the age this one was meant for but I couldn’t resist the story when I saw the book blurb say it involved travel and adventure.

Jacob is a fourteen year old from the U.K. that gets the opportunity of a lifetime to play a part in the next Marvel movie. Of course he begs and pleads with his parents to be allowed to travel to America to have his dream come true.

Jacob’s parents agree to the trip with it all being planned out along the way, what could go wrong? Well, when Jacob misses his connecting flight in Chicago his dreams hit a pothole on his journey. Jacob then comes up with the plan to travel by bus but when he meets an American teenager things really go off the rails.

That Time I Got Kidnapped was a very fast paced and action packed adventure for the younger readers. Yes, there were plenty of chuckles along the way with a bit of mystery and danger to the journey but nothing too dark for younger readers. It was fun also to see the U.S. through the eyes of a younger teen from across the sea which adds to the comedy along the way. 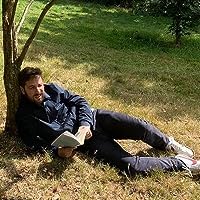 Tom Mitchell is mostly a dad, partly a teacher and sometimes a writer. He grew up in the West Country and settled in London after a brief interlude in the East Midlands. He lives in Kent with his wife, Nicky, and sons, Dylan and Jacob. In 2015 Tom’s Twitter account was one of twenty-five worldwide invited to have its tweets showcased in the Twitter Fiction Festival. He has had comedy sketches performed for BBC Radio 4, both nonfiction and fiction pieces published on The Classical and Londonist websites, and was a semi-finalist in the UK’s Channel 4-organised search for new writing, The Play’s the Thing. HOW TO ROB A BANK was his first novel.