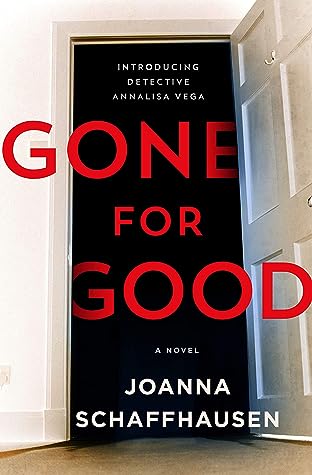 Gone For Good is the first in a new mystery series from award-winning author Joanna Schaffhausen, featuring Detective Annalisa Vega, in which a cold case heats up.

The Lovelorn Killer murdered seven women, ritually binding them and leaving them for dead before penning them gruesome love letters in the local papers. Then he disappeared, and after twenty years with no trace of him, many believe that he’s gone for good.

Not Grace Harper. A grocery store manager by day, at night Grace uses her snooping skills as part of an amateur sleuth group. She believes the Lovelorn Killer is still living in the same neighborhoods that he hunted in, and if she can figure out how he selected his victims, she will have the key to his identity.

Detective Annalisa Vega lost someone she loved to the killer. Now she’s at a murder scene with the worst kind of déjà vu: Grace Harper lies bound and dead on the floor, surrounded by clues to the biggest murder case that Chicago homicide never solved. Annalisa has the chance to make it right and to heal her family, but first, she has to figure out what Grace knew—how to see a killer who may be standing right in front of you. This means tracing his steps back to her childhood, peering into dark corners she hadn’t acknowledged before, and learning that despite everything the killer took, she has still so much more to lose.

Being a fan of Joanna Schaffhausen’s Ellery Hathaway series it was a no brainer that I needed to pick up this new series. Gone for Good is the first book in this new thrilling mystery and it felt a lot like picking up the first book in the Ellery Hathaway series so I think fans will be pleased and new readers can get in on the ground floor of this one if they missed out on the other.

Detective Annalisa Vega gets the call to a disturbing homicide scene when she’s told to use her lights and sirens and wonders why, the victim can’t be any deader when she arrives. What Annalisa walks in on though immediately brings back her childhood. A victim is laid out in much the same fashion as Annalise’s childhood friend’s mother.

The victim, Grace Harper, had joined a group that was made up of regular folks who were obsessed with cold cases and solving those crimes the police had failed to solve. Grace had taken on looking into The Lovelorn Killer who had disappeared off the map after taking his seventh victim, the mother of Annalise’s friend. So as Annalise gets paired up with her ex-husband she also has her long ago crush back in her life as she begins to hunt the killer her father couldn’t put behind bars.

Joanna Schaffhausen has certainly found her niche when it comes to writing about gritty and determined female detectives. While Annalisa Vega is somewhat different from Ellery Hathaway she is also somewhat the same and it felt like returning to something I’ve read before while also getting to know new characters if that makes any sense. I did like that this opener jumped right into the hunt for a serial killer and how it all worked out in the end but I was also curious as to what form this will take to continue. I’m sure when it does it will quickly jump to being a favorite just as the Ellery Hathaway began at four stars and has only gone up each read since.

Joanna Schaffhausen wields a mean scalpel, a skill she developed in her years of studying neuroscience. She has a doctorate in psychology, which reflects her long-standing interest in the brain―how it develops and the many ways it can go wrong. Previously, she worked as a scientific editor in the field of drug development. Prior to that, she was an editorial producer for ABC News, writing for programs such as World News Tonight, Good Morning America, and 20/20. She lives in the Boston area with her husband and daughter.