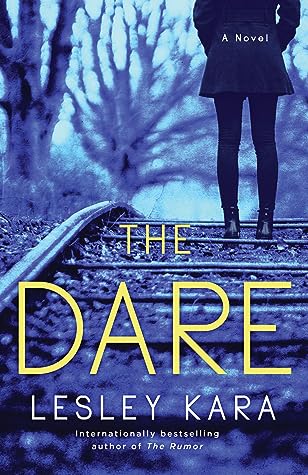 She thought she had put all the questions to rest. But someone from her past wants answers. From the bestselling author of The Rumor and Who Did You Tell? comes The Dare, an electrifying novel of suspense.

At the time it was exciting. A game of dare, but one that had motive and justification. Children can be so judgmental, can’t they? I can still hear her cry as she toppled forward, the dull thud of her body as it landed on the pavement.

Lizzie and Alice are the best of friends, as close as can be. Until the day when they’re out playing by the train tracks and a childish spat triggers Lizzie’s epilepsy. When she comes to, she finds an unimaginable horror: Alice has been killed. Lizzie is devastated, and as she tries to cope with her grief, she is shocked to find herself alienated from Alice’s friends and relatives, who are convinced Lizzie somehow had a role in her friend’s death.

I knew that whatever she wanted me to do, I’d do it. Like that first, dreadful dare.

Years later, Lizzie has tried to move on. She’s engaged to a wonderful man and is starting a new life in London. But someone from her past isn’t willing to forgive and forget. And they’ll do anything to pry them from her. Even if Lizzie doesn’t know them herself.

The Dare by Lesley Kara is a psychological thriller. The story in this one is told from two timelines, one in the past from when the main character was a child and one from the current time when she is an adult. There are also multiples points of view with the main character’s view being the most prominent but a couple of others occasionally to show a deeper side to the story.

As a child Lizzie was always awkward and an outsider having only the one best friend in Alice. You see, Lizzie suffered from epilepsy and her seizures were not pretty but Alice never minded helping Lizzie recover and did her best to protect Lizzie. But one fateful day Alice and Lizzie were walking along the train tracks when they had  a disagreement and Lizzie suffered a seizure only to awaken to Alice’s death.

Lizzie has spent the last twelve years coping with the death of her best friend as a young teen and dealing with that trauma. Now at a good place in her life Lizzie is preparing to marry her best friend as they have moved in together in  a new place. As Lizzie is unpacking boxes she comes across old memories and that time with Alice comes rushing back to her in her present bringing about the paranoia she thought she had left behind.

The Dare was one of those thrillers that was just completing engaging and time flew by while reading. The story is easy to follow with the timeline and point of view changes being well written and flowing along rather well while reading. The suspense build up nicely as the author started layering in the twists and turns during the journey. With this being my first attempt reading this author I’ll definitely be on the look out for more in the future after enjoying this one.

Lesley worked for many years as a lecturer and manager in a large college of further education in London. She now lives on the North Essex coast and writes full-time.

6 Comments on “The Dare by Lesley Kara #bookreview #thriller”