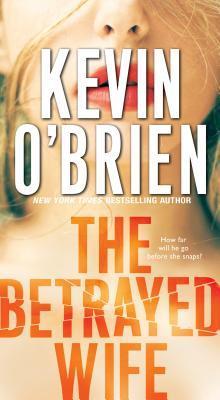 THE PERFECT FAMILY
Sheila O’Rourke has always known her husband isn’t perfect. Who is? But things have been better since they moved to Seattle to make a fresh start. So much so that when sixteen-year-old Eden turns up, claiming to be Dylan’s child by another woman, Sheila tries to be welcoming.

CAN BECOME
At first, Sheila feels sympathy for the girl. Eden’s mother recently fell to her death in an incident with unsettling parallels to Sheila’s past. Still, Eden is a difficult house guest, sowing discord among the family. Sheila has already been on edge for weeks, receiving anonymous texts, noticing odd noises coming from the house next door. And that’s just the start.

A PERFECT NIGHTMARE
Sheila wants to trust Dylan. She wants to feel safe in her own home. But no one can hurt you more easily than the ones closest to you . . . the ones you keep believing until it’s too late . . .

The Betrayed Wife by Kevin O’Brien is a fast paced psychological thriller. The characters in this one, Sheila and Dylan, are married with three children of their own when Dylan’s past comes back to haunt them.

Sheila knows her husband’s flaws but has tried to overlook them for the sake of their children. That is until she begins to suspect she’s being followed and then one day walks into a teen couple in her home. The girl claims to be Dylan’s daughter from a previous relationship shaking up Sheila’s already precarious world.

Having read other books by Kevin O’Brien I knew going into this one that it would fly by at a fast pace and it definitely did which I like. While the book is on the lengthy side it didn’t bother me as much as some with a slower pace although it could have benefitted from shortening a bit. This was also the type that none of the characters were particularly likable and sometimes you want to shout at them but overall I found this one to rate about three and a half stars with some of the authors others being stronger reads for me. .

Before his thrillers landed him on The New York Times Bestseller list, Kevin O’Brien was a railroad inspector who wrote novels at night. His second novel, ONLY SON (1997) was optioned for film rights, thanks to interest from Tom Hanks, and featured in Readers Digest Select Editions. His first thriller, THE NEXT TO DIE, became a USA Today Bestseller. THE LAST VICTIM (2005), won the Spotted Owl Award for Best Pacific Northwest Mystery, and hit the New York Times Bestseller list. Several more New York Times Bestselling thrillers followed. Press & Guide said: “If Alfred Hitchcock were alive today and writing novels, his name would be Kevin O’Brien.” Kevin’s latest nail-biter is THE BAD SISTER. His is also one of thirteen award-winning thriller authors to contribute a short story to the anthology, NOTHING GOOD HAPPENS AFTER MIDNIGHT, edited by Jeffery Deaver. Look for his new thriller, THE NIGHT SHE DISAPPEARED, on Amazon this summer. Kevin O’Brien lives in Seattle, served on the board of Seattle 7 Writers, and teaches at Hugo House. He’s hard at work on his 24th novel. Visit: http://www.kevinobrienbooks.com.