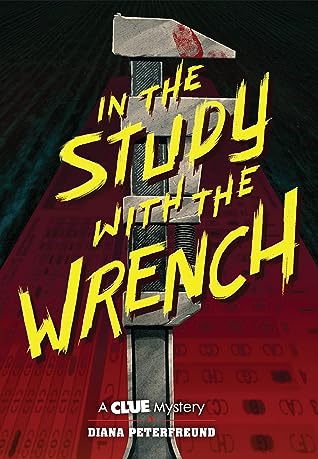 Title: In the Study with the Wrench

The thrilling sequel to the book that Kirkus Reviews called “ingeniously plotted and vastly entertaining,” inspired by the classic board game CLUE!

In the aftermath of Headmaster Boddy’s murder, Blackbrook Academy has been thrown into complete disarray. Half the student body hasn’t bothered to return to campus—but those who have include Orchid, Vaughn, Scarlett, Peacock, Plum, and Mustard, now warily referred to by the other students as the Murder Crew. When another staff member is found dead and an anonymous threat begins to target the group, each of the teen’s opportunistic reasons for sticking around come to light. Orchid’s identity comes under question while Vaughn’s family life takes a turn; Finn and Mustard grow closer; and Scarlett and Beth struggle to turn over new leaves. All of this comes to a dramatic head at Tudor House, with a cliff-hanger that will leave readers eager for the final installment in the series.

In the Study with the Wrench by Diana Peterfreund is the second book in the young adult Clue Mystery series. The story in this new young adult mystery/thriller is based on the board game of Clue. As a kid I loved playing Clue and after taking a closer look at this series I saw that it was also in one of my favorite settings of a boarding school so of course I had to read these.

The story in this series is set at Blackbrook Academy which is located in the woods of Maine. In the first book of the series there was a big storm and the students of the academy, Beth “Peacock” Picach, Orchid McKee, Vaughn Green, Sam “Mustard” Maestor, Finn Plum, and Scarlet Mistry were stranded at the academy along with Mrs White and a handful of other school employees when the body of the headmaster was discovered.

Now Orchid, Vaughn, Scarlett, Peacock, Plum, and Mustard are among the few that have returned to Blackbrook Academy where other students have deemed these students as the “Murder Crew”. Unfortunately for the group they soon end up with another dead body on the campus and with threats coming towards them they need to find out who the murderer is among them.

Now I wouldn’t say the Clue Mystery series is the strongest young adult mystery book out there but there is definitely an air of nostalgia to these after loving the game and other takes of the concept that came before. The story is always told from multiple points of view but it’s easy to follow, especially being familiar with the names. It’s overall a bit campy and silly but still fun to read and puts a smile on my face while reading. I think for me I even enjoyed this second a bit more than the first so I’ll definitely be back for the next book.

Diana Peterfreund is the author of 13 books for adults, teens, and children, including the Secret Society Girl series, the Killer Unicorn series, For Darkness Shows the Stars, and Omega City. Her books have received starred reviews from Booklist,School Library Journal, and VOYA, and her books have been named in Amazon’s Best Books of the Year. She lives outside Washington, DC, with her family.