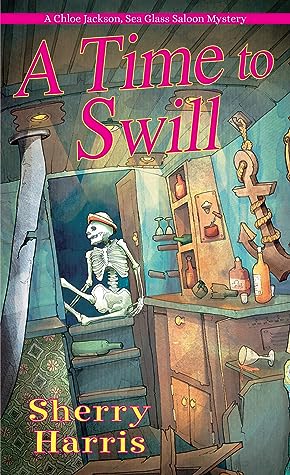 Title: A Time to Swill

Bestselling author Sherry Harris gives us the second in a new cozy mystery series featuring a bartender sleuth in the tiny town of Emerald Cove, Florida.

BAD TO THE BONE

Chloe loves her new life pouring beers and mixing cocktails at the Sea Glass Saloon in the Florida Panhandle town of Emerald Cove. But on the job, the only exercise she gets is walking from one end of the bar to the other, so in the mornings she loves to run on the beach. On this morning’s foggy run, she spots a sailboat washed up on a sandbar. Hearing a cry, she climbs aboard the beached vessel to investigate and finds not only a mewling kitten—but a human skeleton in the cabin.

The skeleton is tied back to Chloe’s friend Ralph, whose wife disappeared on a sailboat with three other people twelve years ago. Believing his wife was lost at sea, Ralph remarried. Now he finds himself a murder suspect. Chloe is determined to find out who’s been up to some skulduggery, but her sleuthing will lead her into some rough waters and some bone-chilling revelations…

A Time to Swill by Sherry Harris is the second book in the new cozy Chloe Jackson, Sea Glass Saloon Mystery series. As with most cozy mysteries each book in this series will feature it’s own mystery that is fully solved within the book leaving each to be able to be enjoyed as a standalone if choosing to do so. There is character development that carries over from book to book however for those that enjoy the entire series from the beginning.

Chloe Jackson is a children’s librarian from Chicago who made a promise to her best friend when he enlisted in the military. If anything were to happen to him Chloe promised to head to Emerald Cove in the Florida Panhandle to see to it that his grandmother would be OK after his passing. What Chloe didn’t expect was the feisty Vivi Slidell who runs the Sea Glass Saloon. Being far from the elderly grandma Chloe thought she’d find she wasn’t sure of staying on but a promise is a promise.

Now Chloe is settling into her life in Emerald Cover working with Vivi and has taken up jogging in her time off to get a little exercise before her shifts at Sea Glass Saloon. One morning Chloe comes across a sailboat having run aground and investigates when she hears a noise. Luckily for Chloe the noise was just a kitten but unluckily for Chloe she also stumbles on a skeleton on the abandoned boat that ties back to someone she knows leaving her to figure out the old crime.

The Chloe Jackson, Sea Glass Saloon Mystery series is not overly quirky and humorous but it is good for a few chuckles along the way so of course I had to come back for book two. Chloe is a likable protagonist and I love the setting in the small town by the sea. There was also once again a fun mystery to follow along with and try to solve along with Chloe so again I will look forward to returning to this series in the future.

Sherry Harris is the Agatha Award nominated author of the Sarah Winston Garage Sale mystery series and the Chloe Jackson Sea Glass Saloon mystery series set in the panhandle of Florida. She is a past president of Sisters in Crime and a member of Mystery Writers of America. Sherry loves books, beaches, bars, garage sales, and Westies — not necessarily in that order. Sherry is also a patent holding inventor.