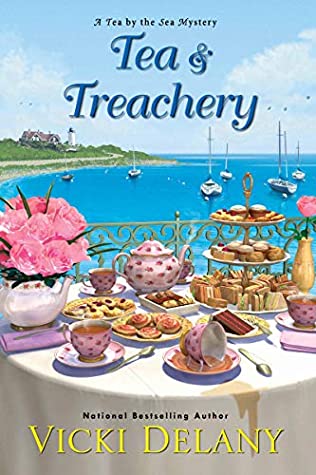 In this charming new cozy mystery series from national bestselling author Vicki Delany, a New York City expat-turned-Cape Cod tea shop owner must solve the murder of a local real estate developer to help her feisty grandmother out of a jam . . .

As the proud proprietor and head pastry chef of Tea by the Sea, a traditional English tearoom on the picturesque bluffs of Cape Cod, Lily Roberts has her hands full, often literally. But nothing keeps her busier than steering her sassy grandmother, Rose, away from trouble. Rose operates the grand old Victorian B & B adjacent to Lily’s tea shop . . . for now. An aggressive real estate developer, Jack Ford, is pushing hard to rezone nearby land, with an eye toward building a sprawling golf resort, which would drive Rose and Lily out of business.

Tempers are already steaming, but things really get sticky when Ford is found dead at the foot of Rose’s property and the police think she had something to do with his dramatic demise. Lily can’t let her grandmother get burned by a false murder charge. So she starts her own investigation and discovers Ford’s been brewing bad blood all over town, from his jilted lover to his trophy wife to his shady business partners. Now, it’s down to Lily to stir up some clues, sift through the suspects, and uncover the real killer before Rose is left holding the tea bag.

Tea & Treachery by Vicki Delany is the first book in the new cozy Tea by the Sea Mysteries series. As with most cozies each book of the series will contain a new mystery that will solved so this could be read as a standalone if choosing to do so.

Some days Lily Roberts doesn’t know what keeps her busier, running her own business, Tea by the Sea, a traditional English tearoom, or keeping up with her feisty grandmother. Thankfully for Lily her tearoom is right by her grandmother Rose’s bed and breakfast so most days she can do both.

One day the quaint area that Lily and Rose run their business is being scouted out by Jack Ford, a developer who wants to buy up the land nearby. Rose is not happy about the whole plan and let’s the developer know so when his body turns up the police believe Rose may have played a part to stop his project. Lily can’t let her elderly grandmother be carted off to jail so she vows to find the killer herself.

This opening book of the Tea by the Sea Mysteries is the first I’ve picked up from Vicki Delany even though she has several prior series so I wasn’t sure what to expect. I did enjoy this one though even not being a tea drinker myself. The characters were fun to get to know and the mystery was a solid one so I’ll definitely return for the second book of the series. 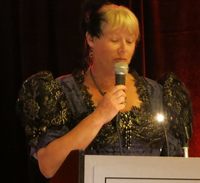 Vicki Delany is one of Canada’s most prolific and varied crime writers and a national bestselling author in the United States. She is currently writing four cozy mystery series: the Tea by the Sea mysteries, the Sherlock Holmes Bookshop series, the Year-Round Christmas mysteries and, as Eva Gates, the Lighthouse Library series. Vicki lives and writes in bucolic Prince Edward County, Ontario. She is a past president of Crime Writers of Canada and a co-organizer of Women Killing It, a crime writing festival. Her work has been nominated for the Derringer, the Bony Blithe, the Ontario Library Association Golden Oak, and the Arthur Ellis Awards. She is the recipient of the 2019 Derrick Murdoch Award for contributions to Canadian crime writing.