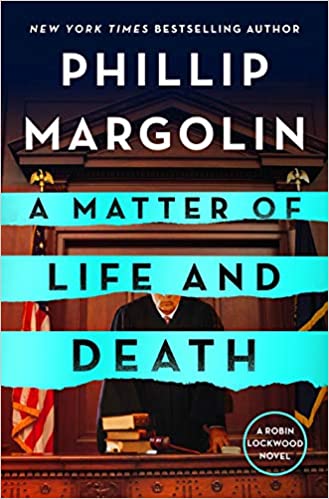 Title: A Matter of Life and Death

Phillip Margolin, the master of the courtroom thriller, returns with A Matter of Life and Death, a classic mind-bending puzzle, as Attorney Robin Lockwood must face her most challenging case yet, with everything stacked against her client and death on the line.

Joe Lattimore, homeless and trying desperately to provide for his young family, agrees to fight in a no-holds-barred illegal bout, only to have his opponent die. Lattimore now finds himself at the mercy of the fight’s organizers who blackmail him into burglarizing a house. However, when he breaks in, he finds a murdered woman on the floor and the police have received an anonymous tip naming him the murderer.

Robin Lockwood, an increasingly prominent young attorney and former MMA fighter, agrees to take on his defense. But the case is seemingly airtight—the murdered woman’s husband, Judge Anthony Carasco, has an alibi and Lattimore’s fingerprints are discovered at the scene. But everything about the case is too easy, too pat, and Lockwood is convinced that her client has been framed. The only problem is that she has no way of proving it and since this is a death case, if she fails then another innocent will die.

A Matter of Life and Death by Phillip Margolin is the fourth installment in the legal thriller Robin Lockwood series. Each book of this series really could be read and enjoyed as a standalone novel with each having the case involved wrapped up by the end. There is some important character development that carries over from book to book however with all the main characters so it’s best enjoyed from the beginning.

In the first book of the series readers were introduced to Robin Lockwood who had been just beginning as an assistant attorney and now she is back tackling her own cases after working with her mentor Regina Barrister. Being a former MMA fighter herself Robin is curious when she gets a visit from Joe Lattimore who explains he is homeless so he joined a no hold barred fight for cash but things went south. When Joe ends up arrested for yet another crime Robin is determined to get to the bottom of his case.

I have been following the Robin Lockwood series from the beginning and continue to enjoy each book as it comes along. As a fan of a good legal thriller I love that this has just the right mix of story action alongside the legal side of the novel. Robin is one tough as all heck lead and I love following her as she gets down and dirty to get to the truth to give her clients the best defense. Definitely one I’ll keep coming back to as when I pick up a new installment each year I fall right back in to the series like I’d never left.