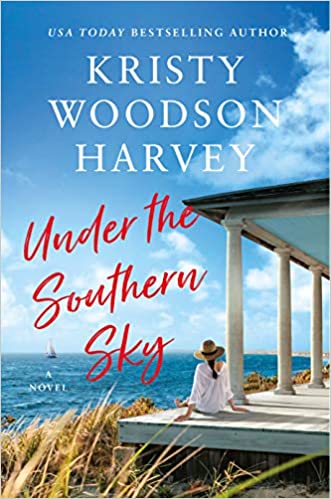 Title: Under the Southern Sky

Recently separated Amelia Saxton, a dedicated journalist, never expected that uncovering the biggest story of her career would become deeply personal. But when she discovers that a cluster of embryos belonging to her childhood friend Parker and his late wife Greer have been deemed “abandoned,” she’s put in the unenviable position of telling Parker–and dredging up old wounds in the process.

Parker has been unable to move forward since the loss of his beloved wife three years ago. He has all but forgotten about the frozen embryos, but once Amelia reveals her discovery, he knows that if he ever wants to get a part of Greer back, he’ll need to accept his fate as a single father and find a surrogate.

Each dealing with their own private griefs, Parker and Amelia slowly begin to find solace in one another as they navigate an uncertain future against the backdrop of the pristine waters of their childhood home, Cape Carolina. The journey of self-discovery leads them to an unforgettable and life-changing lesson: Family–the one you’re born into and the one you choose–is always closer than you think.

From “the next major voice in Southern fiction” (Elin Hilderbrand, #1 New York Times bestselling author), Under the Southern Sky is a fresh and unforgettable exploration of love, friendship, and the unbreakable ties that bind.

Under the Southern Sky by Kristy Woodson Harvey is a contemporary romance in which the two main characters are childhood friends who have both just had their relationships come to an end. The pair have been lifelong best of friends that never would have expected to end up with one another much to the dismay of their families.

Amelia Saxton has just has her marriage end in divorce after finding out her husband had been unfaithful so she has thrown herself back into her career as a journalist chasing down the latest big story. However, upon investigating at a fertility clinic Amelia found out that her childhood friend’s late wife had her embryos in storage and they are about to be destroyed.

Amelia knows that there is no question she has to tell Parker what she has found out knowing that he’s been grieving his wife’s passing for the last three years. Parker is shocked at the news but the chance to still have a piece of his late wife is more than he could have hoped for so he knows he needs to find a surrogate to carry his and Greer’s children.

I’m always a sucker for the type of story held in Under the Southern Sky by Kristy Woodson Harvey and with that beautiful cover I just couldn’t resist picking this one up. The story was a slow building one and having a couple with a history, especially such a long one even if not romantic gives a story a deeper edge to it in my opinion. I found myself drawn in and engaged with what would happen with the characters with the many ups and downs along the way so I rather enjoyed reading this one.

Kristy Woodson Harvey is the USA TODAY bestselling author of six novels, including Feels Like Falling, The Peachtree Bluff series, and Under the Southern Sky. A Phi Beta Kappa, summa cum laude graduate of the University of North Carolina at Chapel Hill’s school of journalism, her writing has appeared in numerous online and print publications including Southern Living, Traditional Home, USA TODAY, Domino, and O. Henry. Kristy is the winner of the Lucy Bramlette Patterson Award for Excellence in Creative Writing and a finalist for the Southern Book Prize. Her work has been optioned for film and television, and her books have received numerous accolades including Southern Living’s Most Anticipated Beach Reads, Parade’s Big Fiction Reads, and Entertainment Weekly’s Spring Reading Picks. Kristy is the co-creator and co-host of the weekly web show and podcast Friends & Fiction. She blogs with her mom Beth Woodson on Design Chic, and loves connecting with fans on KristyWoodsonHarvey.com. She lives on the North Carolina coast with her husband and son where she is (always!) working on her next novel.