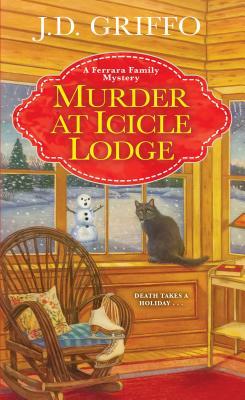 Seasoned Italian-American Alberta Scaglione can whip up a traditional dish for any occasion. But when an impromptu vacation turns deadly, can she sift out the deadly ingredient?

When her granddaughter lands a reporting gig at the grand opening of the luxurious Icicle Lodge, Alberta and friends tag along for a week of much-needed R&R amid the snow capped hills of northeastern Pennsylvania. But the idyllic winter getaway becomes a nightmare after the gang discovers blood on the ice—and the dead body of celebrity guest Pamela Gregory, a frosty Olympic gold medal figure skater who won herself more enemies than fans . . .

With a killer on the loose, multiple suspects, and a blizzard on the way, Alberta must now race to crack a bone-chilling case . . . before the outspoken Ferrara ladies get served murder: family style!

Murder at Icicle Lodge by J.D. Griffo is the third book of the cozy Ferrara Family Mystery series. The twist to this cozy series is that you not only have one sleuth trying to solve the crime but several from a crazy Italian family full of laughs. Each book of the series has it’s own mystery to be solved so they can be understood as a standalone if choosing to do so or there is of course some character building that carries over from book to book if following from the beginning.

In the first book of the series, Murder on Memory Lake, readers were introduced to Alberta Scaglione, a sixty something widow who couldn’t believe the news she received that her aunt had left everything in her will to Alberta including her house on Memory Lake in Tranquility, New Jersey. Alberta was joined by her granddaughter, Jinx who is a reporter, and her sister Helen and sister in law Joyce who all get involved in the crime solving.

Now in this third book of the series the gang is all back and has decided that they need a vacation after all of their previous sleuthing. Alberta’s granddaughter, Jinx, has been assigned a reporter job at the Icicle Lodge in the snow capped hills of northeastern Pennsylvania so what better place for everyone to go? However when the body of celebrity guest, Pamela Gregory, turns up the ladies all know a killer is on the loose and another murder needs to be solved.

I have been following the Ferrara Family Mystery series since the beginning and have become quite found of these characters. This series is one for those that enjoy an over the top quirky and hilarious vibe to their mysteries with lovable characters. And for those that love the cozy mystery genre how often do you find a whole family of sleuths taking turns investigating the clues, such fun! 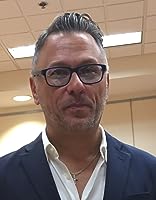 IT’S TIME TO GET COZY!

I’m now writing a cozy mystery series under the pen name, J.D. GRIFFO. The first book, MURDER ON MEMORY LAKE, was published in August 2018 and the second, MURDER IN TRANQUILITY PARK, will be released in March 2019. The third entry, MURDER AT ICICLE LODGE, will be available in late 2019.

The series focuses on the Italian-American Ferrara Family and the murder mysteries they solve in the idyllic lakeside community of Tranquility, New Jersey – which is also a hotbed for homicidal activity! Led by 64-year-old Alberta Ferrara Scaglione and her granddaughter, Jinx Maldonado, they have formed the unofficial Ferrara Family Detective Agency along with Alberta’s older and crankier sister, Helen, an ex-nun, and her sister-in-law, Joyce, a former Wall Street wizard. Together, the group of fearless ladies will do whatever it takes to take down the baddies.

Michael Griffo was born, raised, and has since relocated to New Jersey. He is an award-winning playwright and all of his plays have been produced throughout the country and in London. Two of his plays — CLOUDY and 5G/10B — have been published in Smith & Kraus’s Best 10 Minute Plays for 2 Actors: 2005 and CLOUDY is licensed by Playscripts, Inc.