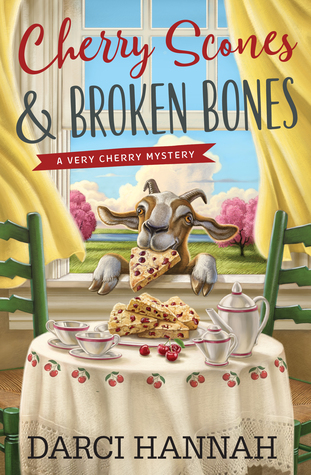 At the Cherry Orchard Inn, “Cherry scones to die for” turns out to be all too true

Tainted by a recent murder, the Cherry Orchard Inn is struggling to attract guests―until celebrated portrait painter Silvia Lumiere books a room for the summer. Whitney Bloom, the inn’s new manager, can’t believe her good luck. Between her scrumptious cherry scones and the painter’s remarkable talent, the inn swiftly becomes the center of the Cherry Cove art scene.

However, all is not the bowl of cherries it appears. There’s a rotten core in the portrait painter that only Whitney and her friends can see. And just as Whitney’s baking skills and patience are pushed to their limits, another death occurs at the inn. With all fingers pointing at her, Whitney realizes it will take all her cherry-tastic talents to bake her way out of this one.

Cherry Scones & Broken Bones by Darci Hannah is the second book in the cozy A Very Cherry Mystery series. As with most cozy mystery series each of the book in this series has it’s own mystery that is fully solved within the book so they can be read as a standalone if choosing to do so.

Whitney Bloom grew up on her parent’s cherry orchard in Door County, Wisconsin but had been living and working in Chicago. After she was fired from her advertising job Whitney took up baking cherry treats but then she got a phone call from home that a murder had occurred at the orchard so she immediately headed back.

After helping solve that first murder at the family cherry orchard Whitney took the job as the Cherry Orchard Inn’s manager. However, business hasn’t been so great at the end after the murder occured so when Whitney gets a new celebrity guest she hopes things will pick up again. Unfortunately for Whitney no sooner than she knows it she has yet another death on her hands and this time all signs are pointing to Whitney being involved so she just has to clear her name.

The A Very Cherry Mystery series is definitely one that is on the lighter side with it being just as much simply charming fun as it is mysterious. Having read both of these I found the main character quite likable and plenty of humor involved that made for an entertaining read. Not sure if this series will continue on as book two has been out a while now but I did have a good time reading these even if it doesn’t. 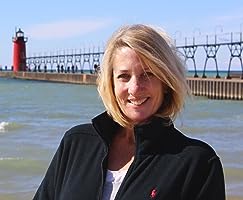 Darci Hannah was born and raised in the far northwest suburbs of Chicago and spent her summers in Door County, Wisconsin, vacationing in a picturesque little village that looks suspiciously like Cherry Cove.

After graduating from Indiana University with a Bachelor’s of Science degree in Kinesiology, Darci made the logical leap and embarked on a demanding career in advertising and the graphic arts. She first started flirting with the idea of writing novels back in the mid-nineties, when she became a stay-home mom.

Mother of three busy, highly-inquisitive sons and wife of a loving but headstrong salesman, plunged her into a world of perpetual chaos in which, ironically, she thrived. But it was just the right mix of soiled diapers, spit-up, cold meals, demanding grunts (and not just from the babies) and piles of revolving laundry to get the creative juices flowing. It is a universal truth that eventually a household will sleep, and that was when Darci picked up her pen.

Darci is a firm believer that however busy, every human soul needs a creative outlet. She is awed and humbled by the creative genius of others, and inspired. A recovering Martha Stewart acolyte, she’s attempted projects in every facet living, and although she really enjoys gardening, decorating, home renovation, sewing, crafting, caring for her children, grooming her dog and cooking for family and friends, Darci recognizes that there are really only three areas in which she excels: creative writing, baking and drinking coffee.

Baking and drinking coffee don’t generally require the time commitment novel writing does, however, Darci approached this Herculean endeavor in much the same way she tackles everything else in her life, with heart, tenacity and humor. After the family moved to Michigan in 2002, Darci soon finished her first novel, and kept on writing. In 2009 all her hard work paid off when she landed an agent and sold two works of historical fiction to Ballantine Books, a division of Random House. She kept writing historical fiction, but soon realized the market had shifted. That’s when she embraced a life-long dream and wrote a cozy mystery. Soon Darci was blessed again. She found literary agent Sandra Harding who gave her the sagely guidance she needed to jump into world of cozy mysteries with both feet. Cherry Pies & Deadly Lies is Darci’s first in what she hopes will be a long and fruitful career in the world of the cozy mystery.

Darci Hannah lives in a small town in Michigan with her husband, three sons, lovable springer spaniel, Finley and golden retriever pup, Ripley. She is the author of Cherry Pies & Deadly Lies (Midnight Ink, 2018) and two previous works of historical fiction, The Exile of Sara Stevenson (Ballantine Books, 2010, 2nd edition by Piffle & Bombast 2016) and the Angel of Blythe Hall (Ballantine Books, 2011). When she’s not traipsing through the woods with Ripley and Finn, engaged in a rollicking adventure with her family or working at the historic Howell Carnegie District Library, she’s either baking, drinking coffee or hard at work on her next novel. In fact, it’s a safe bet to assume she’s doing all three at the same time.

You can learn more about Darci and her books at http://www.darcihannah.com