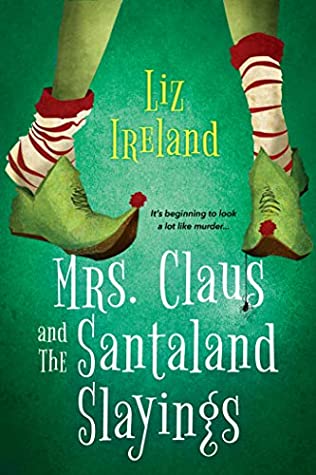 It’s the first Christmas in Santaland for April Claus—but it may also be her last unless she can uncover a villain with a killer Christmas wish. . . .

Love is full of surprises—though few compare to realizing that you’re marrying the real-life Santa. April Claus dearly loves her new husband, Nick, but adjusting to life in the North Pole is not all sugarplums and candy canes. Especially when a cantankerous elf named Giblet Hollyberry is killed—felled by a black widow spider in his stocking—shortly after publicly arguing with Nick.

Christmastown is hardly a hotbed of crime, aside from mishaps caused by too much eggnog, but April disagrees with Constable Crinkle’s verdict of accidental death. As April sets out to find the culprit, it’ll mean putting the future of Christmas on the line—and hoping her own name isn’t on a lethal naughty list . . .

April Claus was a regular woman living in the U.S. when she met Nick, the man she just knew she’d be spending the rest of her life with. What April didn’t know or suspect at the time was that the wonderful Nick she was going to marry was none other than THE Santa Claus.

Now April finds herself living in Santaland at the North Pole trying to adjust to her new surroundings as her first Christmas as Mrs. Claus is quickly approaching. However, someone in Santaland was not full of Christmas spirit when Giblet Hollyberry, one of the elves, was found murdered with all eyes on Santa himself as Nick had just had a disagreement with the cantankerous elf.

I have to say I was a bit back and forth on this new cozy when I began reading it. I guess I was expecting more of a holly jolly lead character with the setting of the story but April was certainly not all Christmas cheer and more of a normal person. However, once you get going all the surroundings of the story certainly all full of Christmas-y references and certainly brought a few laughs along the way. In the end I decided this one fell around 3 1/2 stars for me as I did like where it went even if it took a while to warm up more to the main character.

Liz Ireland is the author of many works of women’s fiction, romance, and mystery. She also writes under the names Elizabeth Bass and Liz Freeland. Like her character April Claus, Liz spends too much time in concert bands. Originally from the United States, she now lives on Vancouver Island in British Columbia. She’s currently working on the next Mrs. Claus mystery.

← The Ex Boyfriend by Rona Halsall #bookreview #thriller
Mine To Keep by M.C. Cerny blitz with giveaway →