The Lost Boys meets Wilder Girls in this supernatural feminist YA novel.

It’s 1987 and unfortunately it’s not all Madonna and cherry lip balm. Mayhem Brayburn has always known there was something off about her and her mother, Roxy. Maybe it has to do with Roxy’s constant physical pain, or maybe with Mayhem’s own irresistible pull to water. Either way, she knows they aren’t like everyone else.

But when May’s stepfather finally goes too far, Roxy and Mayhem flee to Santa Maria, California, the coastal beach town that holds the answers to all of Mayhem’s questions about who her mother is, her estranged family, and the mysteries of her own self. There she meets the kids who live with her aunt, and it opens the door to the magic that runs through the female lineage in her family, the very magic Mayhem is next in line to inherit and which will change her life for good.

But when she gets wrapped up in the search for the man who has been kidnapping girls from the beach, her life takes another dangerous turn and she is forced to face the price of vigilante justice and to ask herself whether revenge is worth the cost.

From the acclaimed author of This Raging Light and But Then I Came Back, Estelle Laure offers a riveting and complex story with magical elements about a family of women contending with what appears to be an irreversible destiny, taking control and saying when enough is enough.

Mayhem by Estelle Laure is one of those books that straddles the line in genres but the most prominant is this is definitely young adult. With that genre though I would definitely warn of a few things with this one such as rape, abuse and language. The story takes place in the late 1980’s making it also historical along with being set in the same world as The Lost Boys giving it a fantasy edge involving some magical realism.

Now when they compared this book to The Lost Boys I was excited to pick it up with that being one of my favorite movies however I was not expecting to go in to the story with the setting almost exactly the same. Instead of the two boys and their mother visiting their grandfather in Santa Carla, California we have a teen girl, Mayhem, and her mother running from an abusive step father to Santa Maria, CA. When they arrive Mayhem goes out with the other kids in the home to a boardwalk desribed almost exactly as I remember. This includes all the missing girl poster and a warning from the Frog brothers about vampires.

Now here is where we finally start differing the story into something of it’s own besides the characters being changed. Mayhem begins to learn that her mother’s family is infused with a long line of witchcraft after Mayhem picks up an old journal of a relative. This all leads to Mayhem learning magic and then helping stop a serial killer.

Now, at first I was a bit excited to be dropped into a Lost Boys world thinking that may make me love the rest of the story but instead I think it actually lead to disappointment. As much as this seemed to mirror the original it also strayed away and to me that story just wasn’t as strong as the vampire original that I think the author would have been better off just creating a similar original world all her own so readers could immerse themselves into Mayhem’s tale that to me this way felt a bit anti-climatic so this one turned a bit meh to me overall. 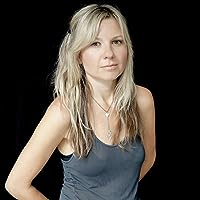 Estelle Laure believes in love and magic and the power of facing hard truths. She has an MFA in Writing for Children and Young Adults from Vermont College of Fine Arts and thinks everyone should have to wait tables or work in a kitchen at least once in their lives. She lives in Taos, New Mexico with her family.