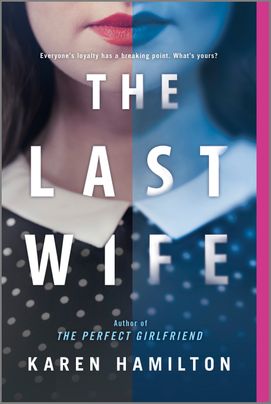 From the internationally bestselling author of The Perfect Girlfriend.

Two women. A dying wish. And a web of lies that will bring their world crashing down.

Nina and Marie were best friends—until Nina was diagnosed with a terminal illness. Before she died, Nina asked Marie to fulfill her final wishes.

But her mistake was in thinking Marie was someone she could trust.

What Nina didn’t know was that Marie always wanted her beautiful life, and that Marie has an agenda of her own. She’ll do anything to get what she wants.

Marie thinks she can keep her promise to her friend’s family on her own terms. But what she doesn’t know is that Nina was hiding explosive secrets of her own…

The Last Wife by Karen Hamilton is a thriller that centers around jealousy and deceit. This one is the story of two women who were once best friends, or so it seemed.

Marie and Nina had been friends forever so when Nina is diagnosed with a terminal illness she turns to her friend Marie and requests that Marie look after her family when she’s gone. Marie of course is more than happy to do so, however, Marie is quick to agree to suite an agenda of her own.

Marie is desperate for a child and after Nina’s passing she finds her own relationship at an end. Marie quickly moves on from her failed relationship though by starting another with Nina’s husband as she quickly moves into her best friend’s life. That move for Marie however unleashes a bombshell from Nina’s past she wasn’t expecting.

The Last Wife was a story that to me seemed to move at an incredibly slow pace which ended up for me a fight to hold my attention. It is also one you have a somewhat unlikable and unrealiable narrator so that didn’t help my enjoyment. It seemed to take forever to get passed the opening obsession with the late best friend and move to other things so in the end I felt this one only came in at 2 1/2 stars for me.

Karen Hamilton spent her childhood in Angola, Zimbabwe, Belgium and Italy and worked as a flight attendant for many years. She has now put down roots in the UK to raise her three children with her husband and she also writes full time.