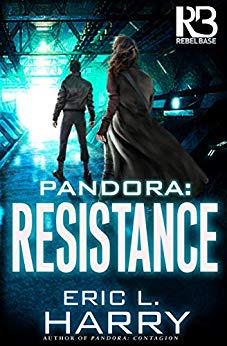 The Battle Lines Are Drawn

Scientist Emma Miller was the first American infected in the Pandoravirus pandemic, which triggers violent rages and sociopathic homicide. No longer fettered by morality or emotion, she has attracted millions of followers, both infected and uninfected. But is she America’s worst nightmare-or its only hope?

Emma’s twin sister Isabel and brother Noah struggle against the threats posed by rampant infection, deadly civil unrest, and desperate government measures. Their-and humanity’s-only chance for a future may lie in an alliance with Emma and her expanding community. Will it be peace between Infecteds and Uninfecteds, or eradication of one group by the other? While cities burn and social order crumbles, one family’s fight to survive will determine the future of civilization.

Pandora: Resistance by Eric L. Harry is the third book in the thrilling apocalyptic science fiction fantasy Pandora Thriller series. This thrilling story began in the first book of the series and has picked up right where the action left off in each additional read so it’s definitely one that needs to be read in order to be understood.

The story started with Dr. Emma Miller being called in to investigate the outbreak of a new virus but when she contracted the virus herself she became the one being studied. After Emma survived the Pandoravirus which kills roughly fifty percent of those that contract the virus it became clear that those that survived are changed.

Dr. Isabel Miller, who is a neuroscientist, was called in to help study the virus and her twin sister Emma when it became clear that the survivors had parts of their brains damaged and were now impervious to pain and lacked all emotion. After Isabel saw what was going on she couldn’t help but warn their brother, Noah, and let him know to get his family to safety.

The story has switched the point of view between the siblings giving readers a look at all sides of the outbreak. Isabel has the inside look at how the government is handling the outbreak, Noah and his family show what it’s like out in the world.. And then there’s Emma, such a suitably creepy and chilling point of view seeing that she is one of the infected.

The Pandora series to me was on that started off a little too scientific in parts of the first book but as it’s moved on it became more intense and action packed. Having characters involved in everything going on in that time in the world gave a deeper level to it than some other apocalyptic reads too. I would still warn readers that rape and assault are a big part of the infected side of the story in case those would be triggers though. Otherwise I do think fans of this genre will like this action packed story of these siblings. Raised in the small town of Laurel, Mississippi, Eric L. Harry graduated from the Marine Military Academy in Texas and studied Russian and Economics at Vanderbilt University, where he also earned a J.D. and M.B.A. In addition, he studied in Moscow and Leningrad in the USSR, and at the University of Virginia Law School. He began his legal career in private practice in Houston, negotiated complex multinational mergers and acquisitions around the world, and rose to be general counsel of a Fortune 500 company. He left to raise a private equity fund and co-found a successful oil company. His previous thrillers include Arc Light, Society of the Mind, Protect and Defend and Invasion. His books have been published in eight countries. He and his wife have three children and divide their time between Houston and San Diego. Contact him on Facebook or visit him online at http://www.EricLHarry.com.