Glow of the Fireflies by Lindsey Duga #bookreview #YA #fantasy #romance

Title: Glow of the Fireflies

Briony never planned to go back to the place she lost everything.

Firefly Valley, nestled deep within the Smoky Mountains, is better kept in her past. It’s been six years since an unexplained fire gave Briony amnesia, her mother disappeared, and her dad moved them away.

But now her grandmother needs a caretaker, and Briony’s dad insists she be the one to help. The moment she returns, she feels a magical connection to the valley, as if it’s a part of her somehow.

And when she meets a hot guy named Alder who claims he was her childhood friend but now mysteriously keeps his distance, Briony starts piecing together her missing past…and discovers her mother didn’t leave to start a new life somewhere. She’s trapped in the hidden world within the valley.

Now, Briony will do whatever it takes to rescue her, even if it means standing up against dangerously powerful gods. But when saving her mother comes with the ultimate sacrifice–Alder’s death–how can she choose?

Glow of the Fireflies by Lindsey Duga is a romantic young adult fantasy tale. With this being the second book I’ve read from Lindsey Duga the one takeaway I can definitely share above all else with her stories is that she goes above and beyond in the creativity department giving readers something new to enjoy.

In this book readers are introduced to teenage Briony who had been living with her father for the last six years since a fire happened in their old home. When her father hears that Briony’s grandmother needs help for the summer he volunteers Briony but she isn’t exactly sold on staying with family she doesn’t remember and who have not contacted her as the years have gone by.

After some convincing and with the promise that Briony’s best friend can come along Briony finds herself arriving in Firefly Valley, deep within the Smoky Mountains.  After arriving Briony intercepts a phone call that her old home is about to be  torn down and wanting to see if her memories would return she makes a visit to the house now in  ruins. What she finds is a boy who obviously seems to have been a friend but when confronting him she ends up finding  a whole world she doesn’t remember.

As mentioned this one was certainly different than any I’ve read. Readers start out in our own Earthly world only to find that much more than humans exist in Firefly Valley where the character finds a link to an astral world existing alongside. As the fantasy world is unveiled so begins a romance and a mystery with adventure when the character finds her mother is alive and trapped. Wrap it all up and it became an intriguing page turner. 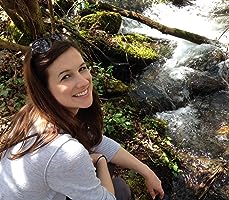 Lindsey Duga is a middle grade and young adult writer with a passion for fantasy, science fiction, and basically any genre that takes you away from the real world. She wrote her first novel in college while she was getting her bachelor’s in Mass Communication from Louisiana State University.

Other than writing and cuddling with her morkie puppy, Delphi, Lindsey loves catching up on the latest superhero TV show and practicing yoga.