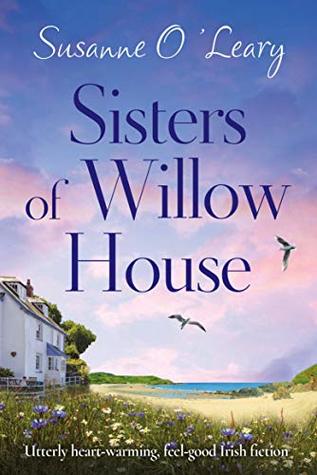 A heart-warming novel about the bond between sisters, set along Ireland’s windswept shores, where romance beckons and secrets unfold…

Roisin McKenna and her husband Cian are taking time apart. Unsure of what she wants, Roisin’s prayers are answered when she receives a call from her sister Maeve who is desperate for her help.

Roisin heads to Sandy Cove to help Maeve restore their aunt’s gorgeous tumbledown mansion Willow House and soon all she has time to focus on are its crumbling walls. Despite a shocking announcement from Maeve and hidden secrets in the house’s rafters, Roisin begins to feel a sense of self she’s been missing for years.

The ties that bind Roisin to her husband seem to be unfurling in the Irish wind, when she unexpectedly stumbles into a mysterious man on the beach. Suddenly, she’s swept up in the idea of another life she could lead…

The restoration may have brought the sisters back together, but as a storm rolls over the coast Roisin feels sure she must make a choice. Will her time at Willow House teach her the precious lessons she needs to return home or has the cove called to her in ways she’d never imagined it could?

Fans of Sheila O’Flanagan, Debbie Macomber and Mary Alice Monroe will be swept away by Sandy Cove.

Sisters of Willow House by Susanne O’Leary is the second  book in the contemporary Sandy Cove series. This second book of the series has changed it’s main character and features her own story so it could be read as a standalone if choosing to do so. However, for those that have read from the beginning you will notice the previous books characters are still here as secondary characters and get updates on where their story has gone since the end of the first book.

Roisin McKenna is the sister of Maeve McKenna who readers may have met in Sandy Cove’s first book. Maeve had come to visit their elderly aunt for a little vacation from her hectic job and instead found herself staying in Sandy Cove after finding love. Now in the middle of restoring Willow House Maeve is more than thankful to have her sister’s help.

Roisin is at a point in her life where she is unsure of her future and now unsure of her marriage. Roisin’s husband had come up with the grand plan of seeing the world in a camper van, not Roisin’s ideal trip, so the two decided on separate vacations when Roisin hears her sister need’s her help.

The first book  of  this series was way more into the romantic side than the second is  but that was completely OK seeing how this was more family focused with some self discovery. The setting is just as beautiful along with some great secondary characters so this was just as enjoyable of a read as different as it was. If there is a book three I’d just request more of Aunt Philomena’s involvement.

Susanne O’Leary is the bestselling author of more than twenty novels, mainly in the romantic fiction genre, mostly romantic comedies, aka chick-lit.. Her four first novels were published in Ireland and then she started self-publishing in 2010. She has also written four crime novels and two in the historical fiction genre. She has been the wife of a diplomat (still is), a fitness teacher and a translator. She now writes full-time from either of two locations, a ramshackle house in County Tipperary, Ireland or a little cottage overlooking the Atlantic in Dingle, County Kerry. When she is not scaling the mountains of said counties or keeps fit in the local gym, she’s writing, producing a book every six months