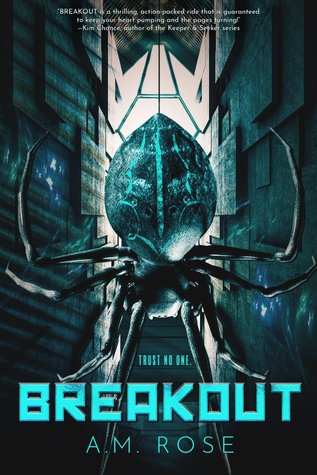 That’s the amount of time until Lezah’s execution.

She’ll die never knowing what got her locked up in that godforsaken prison in the first place. Her only chance of survival is to escape. Except the monitoring bracelet that digs into her wrist, the roaming AI, and the implant in her neck make freedom close to impossible.

Her best chance is to team up with the four other inmates who are determined to break out, even if one of them is beyond gorgeous, annoying—oh, and in for murder. But he has a secret of his own. One that could break Lezah if she finds out, but could also set him free.

Figuring out how to work with him and the rest of this mismatched group of criminals is the only way Lezah will survive to see the outside world again.

But nothing in this prison is as it seems. And no one.

Breakout by A.M. Rose is a young adult science fiction fantasy that is a dystopian, futuristic version of our society. The story is one that is rather fast paced as the characters face constant dangers.

Lezah is in prison with no memory of how she got there or if she did anything to deserve being locked up. There are only six days left on Lezah’s prison sentence but she will not be set free when her countdown is over, instead Lezah will be executed.

With a bracelet on that monitors every move and doles out electric shock punishments when breaking the rules Lezah has little hope of escaping. However, when another prisoner finds a way to deactivate the monitoring bracelet Lezah and her roommate act quickly to try and escape before their countdowns are over.

Breakout is one of those young adult novels that I end up having an internal debate with myself on how to go about rating when finished. The thing with this one was that I seemed to be constantly reminded of other series out there with the action that was taking place, most notably I couldn’t help but think the escape reminds me of searching the maze in The Maze Runner that has the pod like areas of Mockingjay, just kind of blending some from here or there. However, I do like the fast paced action so in the end I would  give this 3 1/2 stars. 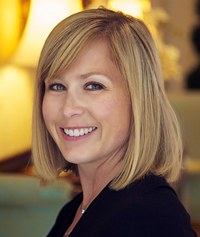 A.M. Rose is the writer of young adult novels of all genres as long as they have a hint of romance, the drinker of too much coffee (with way too much coconut creamer), and lover of all carbohydrates.

Currently, she lives in Houston, TX with her three boys (yes, her husband is in that count) and three cats. When she isn’t writing about swoony boys or ways for her MC to get into trouble, she is an avid reader, critiquer, (is that even a word?) and trampoline enthusiast.

“I aim to give readers the same thrills I got from Veronica Roth and Suzanne Collins. And the same romance I got from Stephanie Meyers and Jennifer Armentrout. When my teenage niece called me after finishing one of her favorite series upset, I promised her I’d write her a book, and well, here it is.”

A.M. Rose is a graduate from San Diego State University with a BA in Communication and a minor in underwater basket weaving. (Okay, maybe not the basket weaving part.)