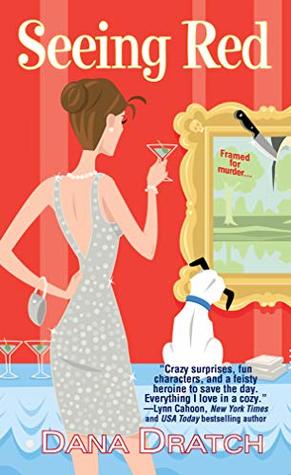 If it wasn’t for art thieves, spies and killers, Alex Vlodnachek’s life would be bliss.

Her freelance career is catching fire. Her relationship with B&B owner Ian Sterling is flirty and fun. She’s even attending a glittering cocktail party at his sprawling Victorian inn.

But, to this ex-reporter, something seems “off.” And it’s not the canapés. When Ian’s father vanishes, the enigmatic innkeeper asks for her discretion. And her assistance.

Meanwhile, Alex is having the opposite problem at her tiny bungalow: People keep piling in uninvited. Including a mysterious intruder found sleeping in her kitchen. Her grandmother, Baba, who shows up “to help”—with Alex’s own mother hot on her heels.

When the intrepid redhead discovers a body in the B&B’s basement and a “reproduction” Renoir in the library, she begins to suspect that Ian is more than just a simple hotel owner.

Can she find the missing man before it’s too late? Or will Alex be the next one to disappear?

Seeing Red by Dana Dratch is the second book in the cozy A Red Herring Mystery series. Each book of the series has it’s own self contained mystery to  be solved so they can be read as a standalone. However, the  best way to get to know the characters is reading from the  beginning as there is some character building carrying over from book to book.

In this series Alex Vlodnachek had spent years as a reporter but left that industry to work in a PR firm and now has a blooming freelance career. With Alex doing well she offered her brother a place  to stay while he tries to get his baking business up and going.

When returning to her locked home one morning Alex finds an intruder in her kitchen, a sleeping infant. Alex and her brother assume that someone meant for them to ca re for the baby and decide to investigate who it belongs to  before calling the law. Meanwhile, Alex also thinks something is a bit off with her flirty neighbor and she needs to figure out what is going on.

This second installment of  the Red Herring Mystery series really showed a bit of the quirkiness that I love in this genre. We have a close family with a cute baby, a adorable puppy and their granny overseeing it all with her wisdom. There was plenty going on to keep readers guessing as to how everything would turn out in the end and I’ll look forward to returning to this series in the future.

Dana Dratch is a former newspaper reporter and current personal finance writer. And she’s currently completing the next Alex Vlodnachek mystery. Learn more about her books at ConfessionsofaRedHerring.com.