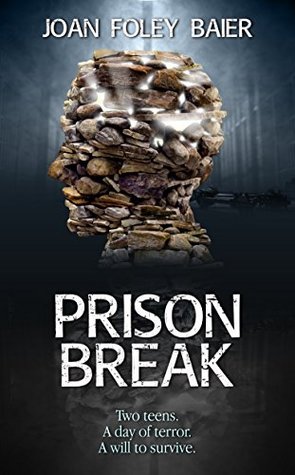 Lizzie Fowler, the prison warden’s daughter, is alone in their home inside the prison walls. The angry inmates riot, burn the shops and invade the house, threatening Lizzie’s life. She manages to live, but the constant fear, the horrible nightmares and her self-induced isolation make living unbearable.

Dan Moriarty drives his father’s car to the prison, amidst havoc in the small town of Auburn, New York, to pick Lizzie up for the big community picnic. But three escaped inmates take over the car and force Dan to help them leave the area. Finally escaped, Dan is angry, angry at everyone in the world, angry with the coach for not letting him practice football, and angry at himself for not helping Lizzie.

Lizzie and Dan, separately and alone, use every resource available to survive. But they can’t forget the terror, the helplessness. Would living be survival? Do they really want that survival?

Prison Break by Joan Foley Baier is a historical fiction story based loosely on the real life prison break that happened in the 1920s. The author has taken the actual event and woven in her own characters and her imaginings of how those characters may have handled the event.

Lizzie Fowler is the teenage daughter of the prison’s warden, she and her family live on the prison grounds. Dan Moriarty is the teen boy that is interested in courting Lizzie and the  two have a date planned the afternoon that the riot breaks out.

At the  time events begin to unfold Lizzie is on the prison grounds alone in her home waiting for Dan to arrive and pick her up putting her right in the middle  of  the  rioting and mayhem. Dan is on his way to  the prison when he begins to hear of trouble and can only think of Lizzie.

Prison Break isn’t a bad story for  those that enjoy  historical fiction based on real life events. The  thing I found with this one though was I just felt it needed more to it then I found. It’s a fairly short, quick read that jumps right into the action that when said and done I felt there wasn’t much more then you get from the  book blurb itself. Personally I would have like more depth to the story and characters to make it more than just “ok”.

Joan Foley Baier was born and raised in Auburn, NY, now living in Rochester, NY. Most of her published material is in magazines (Whenever Whatever, Shine Brightly, Angels on Earth, Grit…) Her short story, The Barn, won Runner Up place in glasswoman.com’s fiction writing contest. Her two novels are: Luvella’s Promise (children’s book) and Roar of Revenge (adult novella e-book). Baier currently has two YA novels out to publishers and is waiting patiently and hopefully for positive responses.

Meanwhile, she maintains a blog (jfbaier.wordpress.com) named “Joanisms” and has a new blog under construction, which she plans to call “Singularity.” The plan is to also have that blog on wordpress.com.