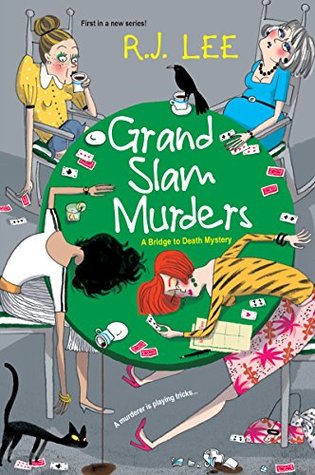 After four bridge players are poisoned, newspaper reporter Wendy Winchester sets out to catch a killer who’s not playing with a full deck . . .

When the four wealthy widows who make up the venerable Rosalie Bridge Club never get up from their card table, this quiet Mississippi town has its first quadruple homicide. Who put cyanide in their sugar bowl? An aspiring member and kibitzer with the exclusive club, Wendy takes a personal interest in finding justice for the ladies.

She also has a professional motivation. A frustrated society columnist for the Rosalie Citizen, she’s ready to deal herself a better hand as an investigative reporter. This could be her big break. Plus, she has a card or two up her sleeve: her sometimes boyfriend is a detective and her dad is the local chief of police.

Partnering up with the men in her life, Wendy starts shuffling through suspects and turning over secrets long held close to the chest by the ladies. But when a wild card tries to take her out of the game, Wendy decides it’s time to up the ante before she’s the next one to go down . . .

Grand Slam Murders by R.J. Lee is the first book in the new cozy A Bridge to Death Mystery series. As with most cozy mystery series the murder mystery in this first book is solved at the end without any cliffhangers.

This story really tosses a reader right into the action with the opening chapter joining the four wealthy ladies that are members of the Rosalie Bridge Club as they are about to play a game. However, instead of some competitive cards we end up with a four way murder when all are poisoned.

Wendy Winchester works for the local paper but instead of the hard hitting investigative journalism she wants to do she has been put in the position of writing the fluff pieces. When the four wealthy women are found to be murder victims Wendy is given the opportunity she has been waiting for to jump in and investigate the murder.

I have to say Grand Slam Murders seemed to have some good points but it also had some things I wasn’t a huge fan of. One, I didn’t like the way we waited to introduce our sleuth and star of the story until after things got going which made it slower for me to connect o her, I was scratching my head a bit at that. But I do enjoy when a lead has some connection to law enforcement which Wendy did. Now I did think there were some interesting characters in here but I also thought things seemed to get a bit draggy as it went on with the questioning etc. Overall, 3 stars for this opener with the ups and downs for me.

R. J. Lee follows in the mystery-writing footsteps of his father, R. Keene Lee, who wrote fighter pilot and detective stories for Fiction House, publishers of WINGS Magazine and other ‘pulp fiction’ periodicals in the late ’40’s and ’50’s. Lee was born and grew up in the Mississippi River port of Natchez but also spent thirty years living in the Crescent City of New Orleans. A graduate of the University of the South (Sewanee) where he studied creative writing under Sewanee Review editor, Andrew Lytle, Lee now resides in Oxford, Mississippi.