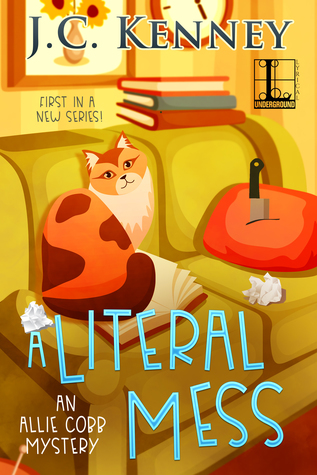 The first book in a new series featuring Allie Cobb brings the New York literary agent back to her Hoosier home town where a mysterious death keeps everyone on spoiler alert . . .

Allie Cobb left home for the literary circles of Manhattan to make her name out from under the shadow of her legendary father. Now his death brings her and her rescue cat Ursula back to the southern Indiana town of Rushing Creek, population: 3,216. But a tragic new chapter hits the presses when the body of her father’s hard-drinking, #1 bestselling client is found under the historic town bridge. The local police suspect foul play and their prime candidate for murder is the author’s daughter—Allie’s longtime friend.

Determined to clear her bestie, Allie goes into fact-checking amateur detective mode while trying to ignore the usual rumormongers. Those with means, motive, and opportunity include the vic’s ex-wife, his rejected girlfriend, the mayor, and a rival agent trying to mooch clients. With a rugged genealogist distracting her and the imminent Fall Festival about to send tourists descending on their once-peaceful hamlet, Allie needs to stay alive long enough to get a read on a killer ready to close the book on a new victim: Allie . . .

A Literal Mess by J.C. Kenney is the first book of the new cozy Allie Cobb Mystery series. As with  most cozy mystery series the mystery within this first book is solved at the end without leaving a cliffhanger so one can read as a standalone or continue onward for another mystery in book two.

Allie Cobb was definitely her father’s daughter as she followed his footsteps into a career as a literary agent. Fresh out of college and trying to make a name for herself Allie chose to begin her career in the big city of New York. However, Allie’s father had taken ill and now has passed on so she is returning to her hometown of Rushing Creek in southern Indiana to attend the funeral and close out her father’s business.

After her father’s funeral Allie fully intended on catching up with old friends and family but before she can even get settled Allie hears from her best friend Sloane that her own father had been found murdered. Determined to help her best friend Allie promises Sloane she will do whatever she can to help track down the killer and bring closure to her.

Now, in my opinion A Literal Mess started off a little more depressing than I would like for a cozy read since generally I like going into these for the light hearted, humorous nature of the stories. However, as one might guess since I’m giving this one 4 stars I did end up really liking the characters and the mystery. It might help that this one is set in my home state so it’s always fun to hear of areas that I’m actually familiar with too but in the end I’ll definitely look forward to seeing what happens in the second book of the series.