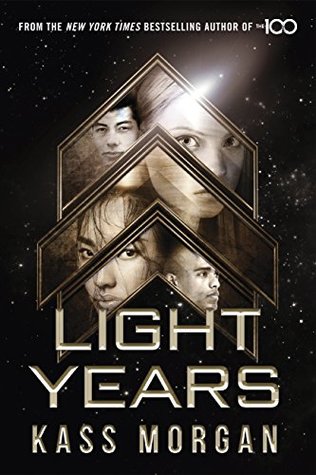 The first book in a thrilling new sci-fi series from the bestselling author of The 100, as seen on TV!

Reeling from the latest attack by a mysterious enemy, the Quatra Fleet Academy is finally admitting students from every planet in the solar system after centuries of exclusivity.

Hotshot pilot Vesper, an ambitious Tridian citizen, dreams of becoming a captain – but when she loses her spot to a brilliant, wisecracking boy from the wrong side of the asteroid belt, it makes her question everything she thought she knew. Growing up on the toxic planet Deva, Cormak will take any chance he can get to escape his dead-end life and join the Academy – even if he has to steal someone’s identity to do it. Arran was always considered an outsider on icy Chetire, always dreaming of something more than a life working in the mines. Now an incoming cadet, Arran is looking for a place to belong – he just never thought that place would be in the arms of a Tridian boy. And Orelia is hiding a dark secret – she’s infiltrated the Academy to complete a mission, one that threatens the security of everyone there. But if anyone finds out who she really is, it’ll be her life on the line.

These cadets will have to put their differences aside and become a team to defend their world from a cunning enemy – but the danger might be lurking closer to home than they think . . .

Light Years by Kass Morgan is the first book in the new young adult science fiction fantasy series by the same name. The series follows four different students from different planets as they join the Quatra Fleet Academy.

Cormak is from the toxic planet Deva and had been struggling to survive with his older brother when he finds out his brother was killed on a mission. Right before he was killed however Cormak’s brother had been admitted into the academy so with him gone Cormak uses his ID to take his place.

When Cormak arrives at the academy he manages to become captain of his team of four.  Teamed up with Arran, an outsider from Chetire who only wanted to escape working the mines, Vesper, an ambitious Tridian citizen who had trained for years and expected to become captain and Orelia who came in with her own dark secret.

The story in the book is told by switching the point of view between the four main characters as they come together at the academy. All were likable and fun to follow as we learn of their secrets and intentions and as they formed relationships around them. There was plenty of action to the story so far and an interesting cliffhanger to set up the next book. I just wondered so far if it really was that unique from other sci-fi tales just yet but with a promising beginning I’ll be sure to pick up book two.

Kass Morgan received a BA from Brown, where she studied history and literature, and a master’s degree from Oxford, where she learned how to queue and walk on cobblestones in high heels. She currently works as an editor and lives in Brooklyn, where she continues to wear impractical shoes.