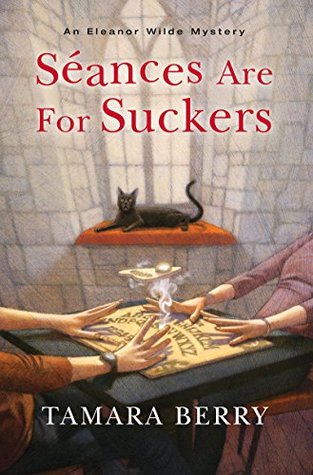 Title: Séances are for Suckers

When something goes bump in the night . . . it’s most likely a plumbing problem, or something equally mundane. But fake medium Eleanor Wilde is happy to investigate and cleanse your home of spectral presences—for a fee. Hey, it’s a living . . .

Ellie has an ailing sister to care for, and working as a ghost hunter who doesn’t believe in ghosts helps cover the bills for both of them. When she’s lucky, it also pays for the occasional tropical vacation. Her brother doesn’t exactly approve, but Ellie figures she’s providing a service. On her latest job, though, she may be in for some genuine scares.

The skeptical, reserved, and very rich Nicholas Hartford III has flown her all the way to his family’s ancestral estate in England—supposedly haunted by a phantom named Xavier. Nicholas thinks it’s all just as much a crock as Ellie’s business is, but the fact remains that something is causing the flashes of light, mysterious accidents, and other apparent pranks in the chilly, eerie castle. His mother is sure that Xavier is real, and he’s willing to employ Ellie if she can get to the bottom of it and put a stop to the nonsense.

While the food and accommodations are somewhat disappointing (dorm-room furniture? Really?), Ellie is finding it an adventure to get to know this eccentric family and their houseguests, and to poke around in the nearby village for clues. But when an actual dead body appears—and subsequently disappears—at Castle Hartford, she’ll have to apply her talent for trickery and psychological insight to solve a
flesh-and-blood murder.

Séances are for Suckers by Tamara Berry is the first book in the new paranormal cozy Eleanor Wilde Mystery series. Eleanor Wilde or Ellie as she likes to be called is a fake medium, well fake as in she let’s her customers continue in their belief of a ghost when she’s moving rats out of the attic that actually went bump in the night..

After an accident ten years ago in which Ellie survived but lost her mother that night and her sister was left in a coma Ellie has had to do whatever she can to pay the medical bills. She doesn’t think of herself as a con artist or fake when she is preforming the service she’s been hired to do but it’s a thin line she’s walking nonetheless.

Just as Ellie is about to head on vacation after her latest cleansing she’s approached by Nicholas Hartford III who is in need of Ellie’s skills. Now Nicholas seems to know Ellie is a fake and just doesn’t care, he’s willing to try anything to rid his family’s home of Xavier the ghost that his mother insists is perfectly real.

Séances are for Suckers was one of those cozies that I just found an absolutely fun read all around. I was liking Ellie by only a couple of pages into the story and her whole fake medium act but color me surprised when we actually do get a bit of paranormal added in too. But the setting and secondary characters all had an appeal on top of thinking Ellie was a fun lead then pile on a unique mystery with disappearing corpses I didn’t want this one to end. Definitely recommend checking this one out to the fans of a more quirky cozy.

Tamara Berry is a part-time author and part-time freelance writer/editor. She has a B.A. in English Literature from Eastern Washington University. In addition to books, she has mad love for all things TV, movies, and pop culture. Visit her at www.tamaraberry.com.