Married to the Russian Kingpin by Leslie North blitz with giveaway 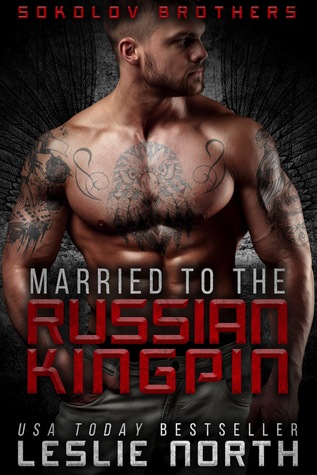 Viktor Sokolov doesn’t know if he should make love to his beautiful new wife… or kill her.

Growing up with a father who held a high position in the Russian mob, Alexandra Volkin was thrilled when her parents signed a contract promising her to a Russian mob boss, even though she’d never met him. All she’d ever wanted was to be the powerful woman of a man everyone respected. So, when her intended is murdered and she is promised to another, Alexandra is nearly unfazed. One mob boss is as good as another. Besides, she can’t deny the strong attraction she feels for Viktor. Alexandra learned at a young age that sex equals power, and she’s about to exert a heavy dose of power on her new, coldly distant husband.

Through a dark twist of fate, Viktor marries the woman intended for his murdered father—and his lovely bride’s own father is the likely murderer. As the saying goes, though, keep your friends close and your enemies closer. It’s not so big a sacrifice when your enemy is your sexy new wife. Viktor doesn’t have the stomach for the brutal violence his father exacted on his enemies, but it’s almost a certainty that his wife’s father killed his own father, and that leaves him with little choice. Yet, while he can ignore his pretty wife’s pleas, and her insistence that her father is innocent… ignoring how she makes him feel is a whole different challenge. There isn’t a going to be a happily ever after for the two of them. Unless, that is, she can prove her father’s innocence.

“Are you almost done? I feel like it’s taken two hours to pin that thing.” The excited smile on Alexandra’s face had carried over to her voice, and she struggled to keep from fidgeting.

“You are beautiful.” Alexandra’s mother Darya finished fastening the bridal veil in her daughter’s golden hair and smiled at her. “Look.”

Alexandra and her mother turned to face the familiar ornate mirror which had decorated Alexandra’s bedroom wall since she’d been old enough to walk. Alexandra let out a whoosh of air she hadn’t realized she’d been holding and stared at her reflection.

The wedding gown was impossibly white, almost silver, and its shimmery fabric clung to her curves in all the right ways. The neckline plunged to reveal only a little cleavage, and led to glimmering lace around her shoulders and down her arms. She thought of her gown as elegant, and loved it as it was, though her friend Elena had said it needed more ‘bling.’

As if, Alexandra thought. The twenty-one-year-old woman staring back at her from the mirror was a flawless picture of beauty. Her usually pale skin had been tanned to bronze, lending her a warm glow, and her eyes were bright like the sky on a cloudless day. Her natural beauty, combined with careful makeup, complimented the perfect white of the dress and made her feel radiant.

“Do you think he’ll like it?” She smoothed the front of her dress. Darya’s smile widened.

“He’ll love it.” Darya’s voice was heavy, with a strong Russian accent. Her parents had moved here, to Boston, from Russia when Alexandra had been a baby. And even though she herself spoke perfect American English without an accent, Alexandra loved how her parents spoke.

“Good. Thought so,” she noted, letting out a confident chuckle. Alexandra stole another look in the mirror and then returned her mother’s smile. “Mrs. Boris Sokolov. Has a nice ring to it.” She faced her mother, raising an eyebrow. “Hopefully as nice as the ring on my finger will be,” she added, allowing out a playful laugh. Her mother grinned back at her.

“So silly for such a serious day.” Darya said.

“Not silly—excited! How many years have I waited for this? I’m getting married! I’m finally getting married, and to a rich, powerful Russian mafia boss, too. My own happily ever after.” Alexandra nearly squirmed inside her gown with growing anticipation. “After Boris and I get to know each other, I’m sure we’ll be just as happy as you and Dad are in your arranged marriage.”

“Marriage takes work,” Darya reminded her, casting a look over her daughter.

“I know, I know, and I’m prepared for that. Spending the rest of my life with someone I’ve never met before is going to make things interesting, but I’m so happy I’m finally starting my own adventure.”

And it was true. She was going to fulfill her dream at last. No more skulking around her parents’ house feeling like she was in the way. No more worrying or wondering about when her life might start to pick up. This was the day she would start living, really living, in luxury and power.

A knock at the door took their eyes to their door, and then Darya turned back to face her daughter, primping her veil.

Alexandra leaned into the mirror one last time, tilted her head to inspect her makeup, and then followed her mother. The anticipation which had previously been a

dull buzz grew to a delightful Christmas morning feeling. This was her day—it was finally here.

The truth of the matter is she loves her fictional persona, Leslie North, more than her normal, day-to-day persona! Her bestselling books focus on strong characters and particularly women who aren’t afraid to challenge an alpha male. Inspired after years of travel, her stories are set all over the world, from the tough streets of Russia to the beautiful beaches of the middle east.

Leslie fell in love with romance when she first picked up a scrappy, dog-eared romance book from her local library. She began writing soon after and the rest, as they say, was history. She now lives in a cozy cottage on the British coast and enjoys taking long walks with her two Dalmatians, George and Fergie.

She LOVES reader feedback, and if you have any comments, don’t hesitate to contact her via e-mail: leslie@leslienorthbooks.com.