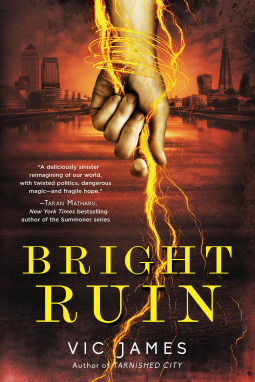 As the dystopian trilogy that began with Gilded Cage and Tarnished City concludes, the people of Britain rise up against their magically gifted masters. They must break the system—or be broken.

The rules are simple, the system cruel: the lower classes must give ten years in service to Britain’s powerfully gifted rulers. With one uprising crushed by the glittering elite, commoners and aristocrats alike now take sides for a final confrontation.

At the center of it all are two ordinary siblings: Abi Hadley and her brother, Luke. Each has reason to hate the ruling Jardine family. Abi, who was once their servant, now seeks revenge for a terrible wrong. Luke was imprisoned on their whim—but his only hope may be an alliance with the youngest and most powerful of the clan, the cold and inscrutable Silyen Jardine.

Risking everything to end a bright and shining tyranny, Abi, Luke, and Silyen find themselves bound by a single destiny. Their actions will change their fates—and change the world. But at a cost almost too terrible to contemplate.

What price would you pay for freedom?

Bright Ruin by Vic James is the third book of the young adult fantasy Dark Gifts series. From the title of the series to the intense book cover one should guess that this series is not all rainbows and sunshine but one that is incredibly dark and sometimes disturbing so while it is young adult I would recommend keeping this series on the the older crowd side of the genre.

The series takes place in a society in which the world is ruled by Equals who are aristocrats with magical gifts. Everyone else are known as commoners and at some point during their lifetimes they have to serve the Equals for a period of ten years as their slaves. Commoners can choose to serve at any point in their lives from 10 to 80 years old.

In Gilded Cage we met a family that when the youngest child turned ten the parents decided to sign the whole family up for their slave days to be completed together. Luke’s older sister Abi has arranged for the family to work together at a plantation owned by England’s most powerful family of Equals. But upon arrival the paperwork had been messed up and Luke is shipped off to a slave town separate from the rest of his family.

The series is one that definitely needs to be read as a whole with starting from the beginning with Gilded Cage then continuing with Tarnished City and Bright Ruin as the plot carries over and picks up where it left off from book to book. While I have rated in the middle with each of this books the series has definitely still held my attention all throughout. The world is incredibly dark and one that more angers me than falling in love with as do some of the characters but it’s thought provoking and creative so it kept me coming back from book to book. And now at the end I’m again rating at 3.5 stars but I would recommend checking this out if up for a darker society and content. 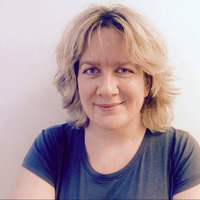 Vic lives in London’s Notting Hill, but her life is more action-adventure than rom-com.

She studied History and English at Merton College, Oxford where Tolkien was once professor. Relocating to Rome, she completed her doctorate in the Vatican Secret Archives (they’re nothing like The Da Vinci Code), then spent five years living in Tokyo where she learned Japanese and worked as a journalist. She now alternates writing full time with directing documentaries for the BBC.

Vic has scuba-dived on Easter Island, camped at Everest Base Camp, voyaged on one of the last mailboats to St Helena, hang-glided across Rio de Janeiro, and swum the Hellespont from Europe to Asia. But there’s little she loves more than lying in bed till midday with a good book and a supply of her favourite biscuits.