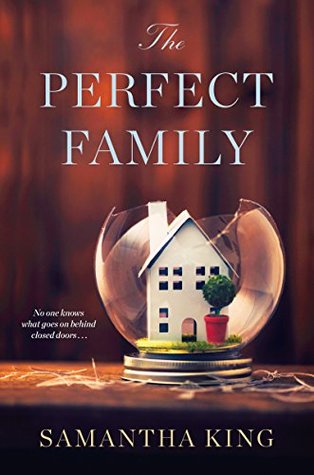 Relentlessly twisting, Samantha King’s debut novel is a dark and brilliant slice of psychological suspense in which even the happiest family can awake to a nightmare . . .

Maddie Castle is broken. Ever since the tragedy that struck on her twins’ tenth birthday, she’s been trying to fit the pieces together, to get back to the life she led before. Maddie, her husband, Dom, and their children, Aidan and Annabel, lived in a comfortable home on a quiet street in a London suburb. Life was busy and satisfying. They were happy. Weren’t they?

Now, a disoriented and grieving Maddie floats like a ghost through each day, hardly sleeping, eating, or speaking. It’s easier to stay locked in her own head than to torment herself by reliving what happened. And yet, the harder Maddie tries to pin down her memories, the more they slip out of reach. Is her guilt and remorse justified? Is it Maddie’s fault that everything was ripped apart?

Or could it be that the real terror is still to come?

From the outside Maddie Castle had the perfect family. Married to her husband for just over ten years she has two beautiful children, twins, a boy and a girl. But life for Maddie hasn’t always been roses with her husband but she had gotten careful at hiding their problems.

On the twins tenth birthday though the unthinkable happened to Maddie and her babies. Just about to celebrate the doorbell rings and as they go to open the door a masked man grabs the twins and holds a gun to them screaming for Maddie to choose which one lives. What is a mother supposed to do in that situation??

Now Maddie is living in the aftermath of that horrible day with her husband and her son. Maddie’s daughter became a victim of the violence and Maddie doesn’t know how to live with herself after what happened. Will the family ever be able to pick up the pieces and move on?

The Perfect Family by Samantha King is a psychological thriller that started off with a horrifying choice for a mother that certainly grabs one’s attention. As the story went along there are definitely some twists and turns along the way, some of which I didn’t expect giving it a very strong beginning but eventually the book seemed to sort of mellow out to me and become a bit too obvious in where it was going. I was getting a bit frustrated with the MC going back to certain things repeatedly too. In the end I’d rate this one at 3.5 stars as it was certainly a good read but I’d hope for a few more twists at the end.

Samantha King is a former editor and a qualified psychotherapist. After her childhood in the south‑west of England, teenage years spent in the north‑east and student days somewhere in between, she finally settled in west London where she enjoyed a career publishing other people’s books, before going freelance and surrendering to a long‑time urge to write her own. She lives with her husband and two young children, who inspired her to write her debut novel. An English graduate and lifelong bookworm, Samantha is always fascinated to hear readers’ opinions. You can share yours with her on Facebook @SamanthaKingBooks or follow her on Twitter @SamKingBooks.