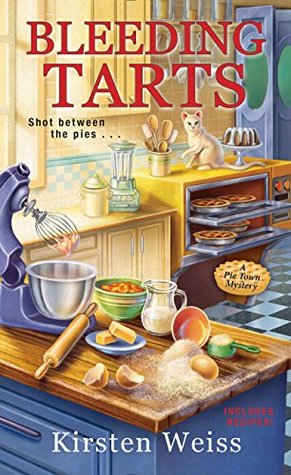 Old West ghost towns are as American as apple pie. So what better place to sponsor a pie-eating contest than the Bar X, a fake ghost town available for exclusive private events on the edge of Silicon Valley. Valentine Harris is providing the pies, hoping to boost business for her struggling Pie Town shop and become a regular supplier for the Bar X.

But no sooner does she arrive in town than a stray bullet explodes the cherry pie in her hands. And the delicious dessert is not the only victim. Val finds the Bar X bartender shot dead in an alley. Egged on by her flaky friend and pie crust specialist, Charlene, Val aims to draw out the shooter. But solving a real murder in a fake ghost town won’t be easy as pie. And if Val doesn’t watch her back, her pies won’t be the only thing filled full of lead . . .

Bleeding Tarts by Kirsten Weiss is the second book in the cozy Pie Town Mystery series. Each book in the series features a new mystery to be solved so it would be possible to understand the mystery as a standalone however the character stories do carry over book to book.

Valentine ‘Val’ Harris is the owner of Pie Town and is out looking for new business hoping for a contract from the owner of the Bar X , a fake ghost town. When Val and her pie crust maker, Charlene, arrive at the Bar X Val finds herself almost the victim of a stray bullet that instead takes out one of the pies she’s carrying.

As Val runs and ducks for cover after her pie is shot she finds herself in the alley next to the saloon at the Bar X where she uncovers a dead body. The bartender of the saloon is in the alley the apparent victim of one of the flying bullets. As Val phones police covered in cherry pie some begin to think she is the shooter so again Val and Charlene find themselves chasing a murderer before they become the next target.

I’m sure it’s very apparent from my rating that I absolutely love this series. It took all of a few page turns to immediately begin laughing again and think to myself oh my I missed Charlene… yes, Charlene the side kick in the stories, the lady is absolutely hilarious. Now don’t get me wrong I’ve enjoyed Val and the setting of her pie shop along with the mysteries but I think if you took Charlene out of the books they would probably fall flat and instead with her I find myself laughing out loud and loving every minute. This series is one that I will be sure to return to over and over just for the laughs alone. Kirsten Weiss worked overseas for nearly fourteen years, in the fringes of the former USSR and in South-east Asia. Her experiences abroad sparked an interest in the effects of mysticism and mythology, and how both are woven into our daily lives.

Now based in San Mateo, CA, she writes genre-blending steampunk suspense, urban fantasy, and mystery, blending her experiences and imagination to create a vivid world of magic and mayhem.

Kirsten has never met a dessert she didn’t like, and her guilty pleasures are watching Ghost Whisperer re-runs and drinking red wine. Sign up for her newsletter to get free updates on her latest work at: http://kirstenweiss.com